My apologies for skipping our "Return to the Cave of Time" episode last week. I plead "Coding Fog" as my excuse. Luckily, even though I was asleep at the wheel, our intrepid time traveller (and you, his controlling public) were not sitting around idle -- we decided we should send him scampering up the cliff wall after our Neolithic compatriot in an attempt to avoid the clutches of the savage cave bear:

You leap high against the cave wall, grab a handhold, dig the toe of your right foot into a tiny niche, and begin to climb. Looking over your shoulder, you see the bear lumbering toward you, grunting and snorting.

You're able to climb a few feet higher, but the wall becomes even steeper above you. Your feet are still within the bear's reach, and you can't find a higher handhold! Suddenly your wrist is seized in a tight grip, and you feel yourself rising, then being hauled onto a ledge. Only then does the grip release you. Aching and sore, you look into the smiling eyes of Iaark, then back at the claws of the bear raking the lip of the ledge, trying to reach you.

"Aug," says Iaark. He starts crawling ahead into a dark tunnel.

You wonder whether to follow him. He saved your life, so you're pretty sure you can trust him, but you don't know anything about him except that he's tremendously strong.

This is the choice page from the eBook; I'm assuming that's Iaark there at the bottom, looking up like some kind of prehistoric fountainhead. I just thought you might want a look at who we're supposed to be following: 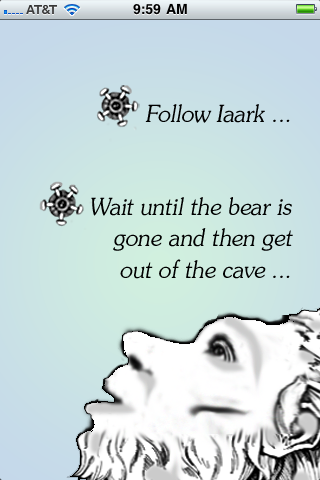 I think the narrator did a pretty good job of summing up our options on this one. So what'll it be, intrepid explorers, do we follow our muscular but likely pre-human Mr. Muscle into the deep, dark recesses of the cave, or do we lam out on our own?