Forward to the Past!

Maybe in the past we can pick up some good tips on better metaphors.

Regardless, here we go!

You are in a cave, close to the entrance. For a minute it feels as if your mind has become detached from your body -- the feeling of being transported through time. Looking out, you can see that you are high on a mountainside. A vast landscape of plains and lakes and patches of forests stretches beneath you. There is no sign of human habitation. You wonder if you are living thousands of years in the past, perhaps before the appearance of human beings. In the distance you notice dark moving specks, what might be a herd of grazing animals. Where there's life, there's food, and hope for survival you think.

OK, fine, rub it in that we went to the Earth of the future where it's all a big huge wasteland. I didn't think the Oracle of Time was so vindictive!

You sense a presence nearby. You whirl around, and your eyes meet other eyes. They belong to a boy who looks older than you, though he is a bit shorter. His wavy brown hair is shoulder length. he is naked except for crudely fashioned shorts made of animal skins. He looks more solidly built than any boy you remember. His muscles bulge as if he has been weight lifting. His bushy eyebrows are set on bony ridges above his eyes, giving him a brutish look; yet there's something sweet and friendly in his expression.

"Iaark," the boy replies. He steps close and stares at you. At that moment you hear a deep-throated growl. In the dim light near the back of the cave, you can make out an animal of monstrous proportions -- a gigantic cave bear, larger than any bear in your own time! Terrified, you stand watching.

And really, that seems to be what we're best at -- standing in terrified paralysis in the face of danger. 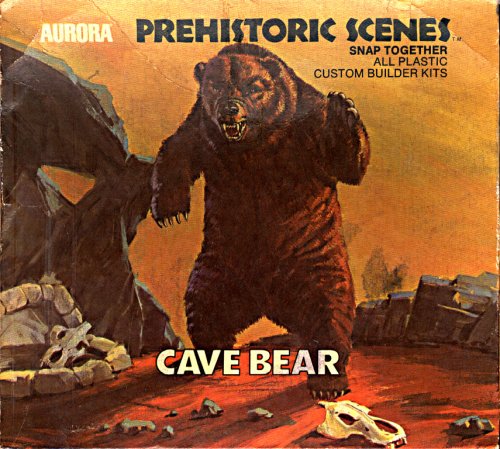 The boy touches you. "Narga," he says, and pulls at your arm, then starts climbing the sheer wall of the cave, gaining handholds on rough niches in the rock. You watch with amazement as he pulls himself up by his arms alone. A moment later he slips into a cleft in the rock, safely out of reach of the bear. The bear follows the boy with his eyes, then turns toward you and growls so loudly it shakes your bones. You'd better do something fast!

The fundamental question here is, does "Narga" mean "Follow me" or "Good luck being that bear's lunch"? And do we have the arm strength to climb up that wall with a giant bear chasing us?

You decide, we report!

15 Responses to Forward to the Past!