Your challenge for this week is to create the coolest character in the best illustration possible using any version of the HeroMachine that has something to do with the broad category of "weather". You could just use a name of a meteorological phenomenon like "Zephyr" or "Hurricane", or you could design a weather wizard from a fantasy role playing game, or simply a super-hero with some sort of weather-related powers. Classic examples would include "Weather Wizard" from the Flash comics, "Iceman", "Storm", or "Emma Frost" from the X-Men, the Red Tornado from DC Comics, or so on. 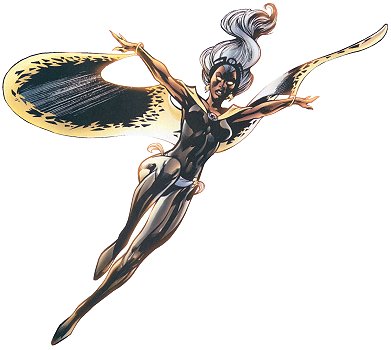 Poor examples would be something like DC's "Geo-Force", who can control the Earth, but not weather; the Human Torch, because fire isn't really related to weather; or The Hulk, who's a force of nature but not a force of weather.