Cross-universe publishing house fights have been a staple of the dedicated fanboy for decades (and, not incidentally, also a source of profits from the blockbuster team-up issues). Our intellectually demanding question for this week tries to figure out what would happen if you took the most powerful "every day" super-hero from four of the biggest historical publishers and pitted them against each other: 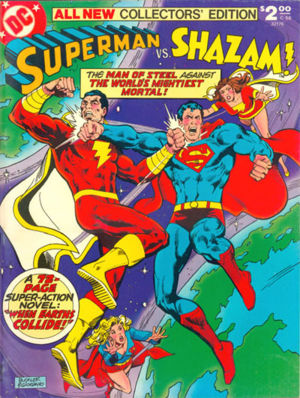 I'm going to count Spawn out mostly due to his lack of super speed. By the time he knew a fight was going on, as the other three zip around at light speed, it would all be over.

Captain Marvel has the wisdom of Solomon, so I think he'd be able to resist Sentry's mental abilities. However, he's also got the brain of Billy Batson knocking around in that square-jawed super skull, and they've been known to be susceptible to mental domination before (that little worm with the radio around his neck). Still, he'd have a chance against the other two.

Sentry has an edge with those psionic powers, but Golden Age Superman would be able to use his Super Thinking and Super Willpower and Super Mental Defense (or whatever other inane Super power the writers could pull out of the nearest available orifice) to counter it.

Which is why ultimately, I'm going to be old-school and go with Golden Age Superman. There's no pickle so picklish that Golden Age Writers couldn't justify some new power to overcome it. Therefore, Superman wins!

Go ahead, show me I'm wrong, I Super Dare you!