The one thing I wish I'd done at the beginning of this would be to give a basic art instruction course on the human form. I'm not terrific at drawing a human form, mind you, but I remember enough from those classes to teach it to you on here. And who knows, maybe some of you WILL use some of it to go draw, who knows? 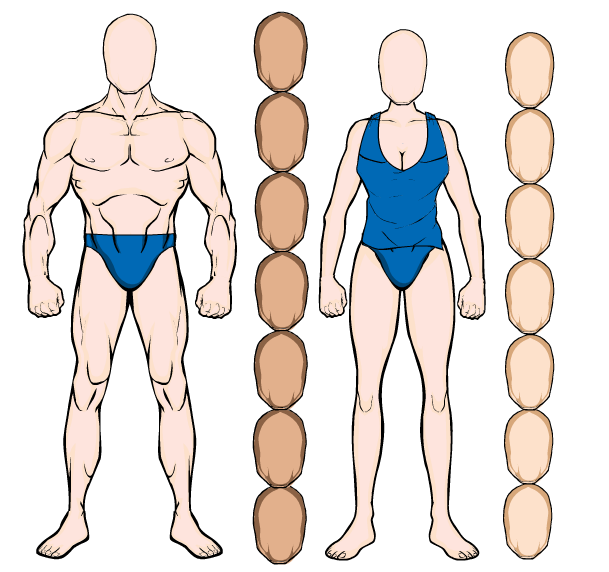 Anyway, we'll start with the rule of thumb for proportions--the human head. The standard for measuring people always starts with the head, I guess because everyone usually has one. (Unless you're into some really creepy art...)

A normal human male, standing straight up, is roughly seven of his own heads high. A female, on the other hand, is considered  to be only six and a half  heads high. Fortunately, Jeff's standard male and female bodies match this proportioning; however, because of the original source of the heads, you need to enlarge them a bit to get the right size. I usually use 120% for the male heads, and 110% x 115% for the females. This leaves the female at seven heads in height also. (I use a smaller female head to get the thinner facial dimensions, then "add" the extra width with hair.)

One important thing to remember when making females is to slim down the hands and feet slightly to fit better. Women generally have smaller, thinner hands and ankles than men. (To those that don't and are offended, I apologize and request that you keep your large thick fists to yourself, please?) In the picture at above left, I kept the height of the females hands and feet at 100% but decreased the width to high 70s. (Someone said a while back, I don't remember who, that 77% was the ideal women's sizing--I find that it varies somewhat but does seem to center in that area. Use your own discretion for proper fit.) 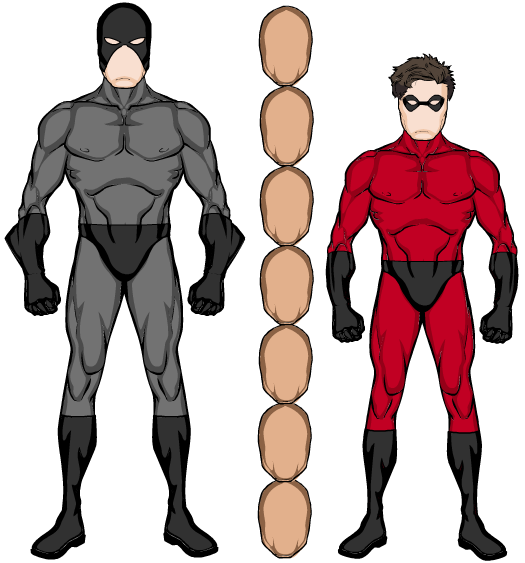 Now, one of the chief complaints has been "But we wanna make teenagers!" So today, I'm going to give you teenagers. If you look to your right, you'll see a diagram of my two familiar "dressing dummies." The adult on the left is a full seven heads high, while the younger on the right is just past six heads high. With a body size of 90% and a head of 115%, he appears to be around the age of fifteen. To get an even younger look for a team photo, size the body down further, but remember to keep making the head proportionally larger the smaller the body gets.

As a brief history lesson without any good examples--Back in the old days, when even famous artists would paint scenes including multiple generations of family, the children always looked strange, misproportioned. This was because the artists, who were painting by several rules of thumb without actual measurements, would make everyone in the picture seven of their own heads tall, or at least make the head 1/6th of the rest of the body height. As infants, a head might only be a third to a fourth of the baby's total length, depending on age. This of course would put their heads at about half the size of an adult. Grade-school children tend to be around four adult heads high, but five of their own heads. Adolescents measure in at about 5 1/2 adult heads and six of their own. Late teens finally bring a person's head to near it's adult size, and 6 1/2 adult heads is an apt measurement for a normal teen.

"But Damien," some of you are saying, "for some reason of mine, I was using a normal sized body for my teenager. What would I do then?" Well, that one's simple. You just make the head bigger and the features more exaggerated, like so:

We'll call these young ladies Kate, because my wife said so. Kate is obviously in somebody's marching band somewhere. To make the point about head size vs. age, I only changed the proportions of her head, eyes, nose and mouth. Young Kate, on the left, has a face that still appears to have some baby fat, large inquisitive eyes and a ready smile. She's probably around fourteen. (Head-125%, eyes-125% x 150%.)

Older Kate on the right almost looks like she could be Kate's elder sister, if not a very young mother. Her face and nose have thinned a bit, her eyes view the world through a lens of experience, and her smile is genuine if melancholy. At minumum, she's managed to parley her band-leader skills into the college marching band, and the look on her face is from one too many professor's lectures. (Head-115% x 120%, eyes-125%)

Well, that should cover the basics of making a teenager or just a regular person the right height, and understanding the hows and whys. Be sure to tune in to my "Females ONLY! Poses Post" tomorrow!