Ten years ago there was no such thing as blogging, and thus the comics from that era were largely free from the kind of scathing mockery that's so vital a part of our daily lives today. You can find plenty of people online reviewing comic books being published right now, but who will serve the needs of those neglected issues from years gone by?

Each week I'll take at least a few of the books in the Random Ten and write them up just like the big kids do for comics being published today. For now I'm calling this feature "Retroviews" (retrospective reviews, dontchaknow), and our first item on the review stand from the past is the 1998 DC comic "Haywire". 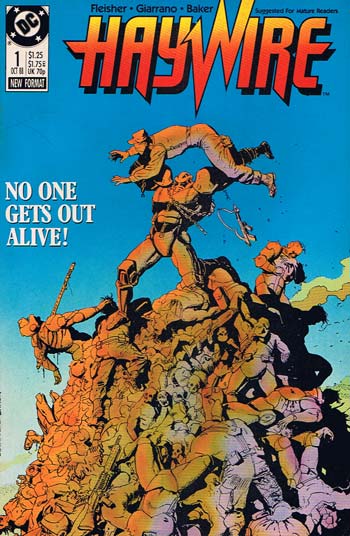 Keep in mind that this comic book was published in 1988, two years after "Watchmen" and "The Dark Knight Returns". Clearly it had been proven beyond a shadow of a doubt that it was possible to do good, intelligent, nut-crunching, mind-blowing, truly mature (in the good sense of the word) comic books, and yet DC put out this piece of derivative dreck. You know you're in trouble just from looking at the cover. Go ahead, look at it, it's right up there. I'll wait.

OK, hopefully you noticed that the cover art exhibits some of what I like to call "Jeff's Telltale Signs That The Comic Whose Cover You Are Examining Is Probably Going To Suck", namely a) the main character is in a suit of powered armor which features an enormous integrated codpiece; b) someone is standing on a pile of corpses at least some of which (but not all!) have been there long enough to turn into skulls (note that zombie or monster comics are exempt from this rule); c) everything is the same color -- mud; and d) the cover artist couldn't be bothered with drawing a background.

Since this is issue number one, however, we're willing to cut it some slack because hey, we all were young and stupid once, and every comic deserves a chance. So we crack open the cover on this bad boy and are treated to your usual backstory of the hero's parents shot when he was a boy. Why do so many creative types insist on bumping off parents? I blame Walt Disney, personally, who seems to have hated mothers in particular since so few of his films have living ones. But I digress.

This comic is fairly banal for the most part, and actually features one fun sequence involving a visit to an alien-abductee nutcase who's built his own cardboard spaceship in the backyard, which I totally want to do. But two things push it into the crap category, one quite literally. Which is to say, the mud/dung/dried baby vomit color used on the cover was not accidental -- it's the main character's actual color scheme! Yes, you have a super-hero comic book whose main character not only eschews primary colors (which is probably a good thing in general), but rather all color that's not brown! You have to admire that kind of single-minded devotion to a palette, my friends: 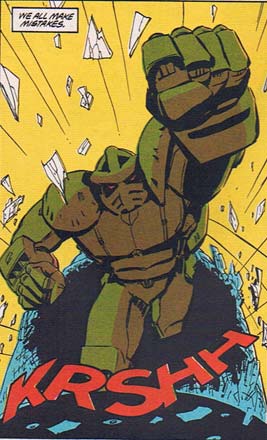 Haywire is absolutely correct, of course, we all do make mistakes, and his was in not picking up a few cans of Krylon when he was at Home Depot.

The other thing that ruins the issue for me is this scene: 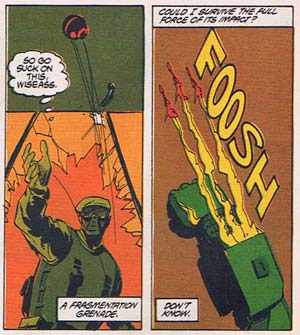 We're supposed to believe that someone has come into possession of a suit of powered armor so valuable that terrorists take over a whole building to get him out into the open, and yet this super-valuable outfit might not withstand a freaking fragg grenade?! What the hell?! Some criminal mastermind somewhere got totally shafted by his military contractor, which while certainly realistic, is not necessarily the stuff of which great comic books are made.

In short, if you missed "Haywire" the first time around, be thankful. You didn't miss much.