Posted on August 7, 2008 by AFDStudios | Comments Off on Sienkiewicz caricatures Mignola

On the last page of "Rocket Raccoon" no. 1 (originally published in 1985) is an article from editor Carl Potts about the team who put the series together. The penciller of the series was a very young Mike Mignola, who of course is now famous as the creator of "Hellboy" and "BPRD" as well as the winner of numerous Eisner Awards. But 23 years ago he was just starting out in the industry; here's what Potts had to say about him in the back of "Rocket Raccoon":

On the lower left is Mike Mignola. Mike's been around the field for a few years as an inker. Relatively recently he took up pencilling as well. You might remember his full art job on the Sub Mariner story in the back of MARVEL FANFARE #10. Lots of letters crying "more" came in after that one so here you go! After Mike finishes drawing all four issues of Rocket's limited series, he'll be laying out a few issues of the HULK (starting with #311). Shortly thereafter Mr. Mignola will be taking over the pencil pushing chores of ALPHA FLIGHT!

And the rest is, as they say, history. To cap off the article, legendary artist Bill Sienkiewicz draw an illustration of the four leads on the Rocket Raccoon series, and here's his version of Mr. Mignola: 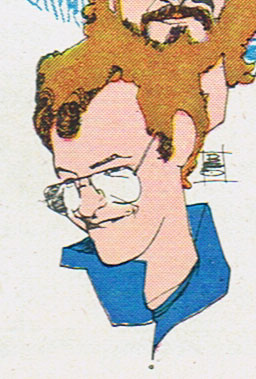