It's good to be a geek

When I was looking through my old sketch books for the early HeroMachine designs, I stumbled upon the first comic book concept I worked on as more than a passing fancy. A friend of a friend and I worked through actual story ideas and I came up with a number of conceptual sketches that I remember being fairly proud of at the time. Nothing ever came of those discussions, but I've scanned the drawings in and re-inked them: 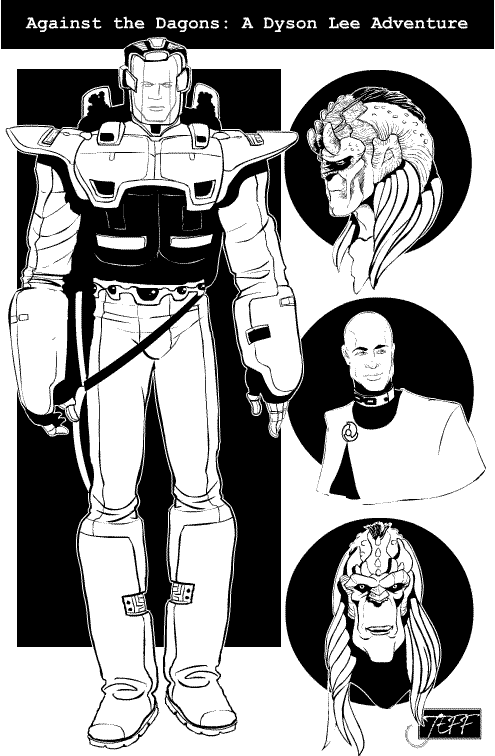 The Dagons were the bad guys, if I recall, and representing the forces of humanity was Dyson Lee, Space Marine. Or Navy SEAL. Or something, we never figured out which. I do remember envisioning that humanity was controlled by a very powerful theocracy, founded on the notion that everyone in the military voluntarily enslaved themselves to the hierarchy for the duration of their service. Hence the chain links as rank insignia on his uniform there.

I also argued that men and women both who were in the military should be bald, since that made the most sense in a helmet-wearing zero-gee environment. Looking back on it that might have been pleasing from a story-telling standpoint, but likely would have been disastrous in terms of marketing.

Sometimes I step back a bit and marvel at the sheer creative energy that geeks like us put out. I mean, I would bet that every person who's reading this has a hard drive full of the remnants of whole worlds they've imagined, whether in the form of a half-baked comic like this one or that great American novel that never quite came together. People describe today's generation as passive consumers, but at least the gamer/geek subculture is anything but. What we love about comics and movies and gaming is that it helps us feel creative. It spurs us to create our own worlds, our own characters, and if, like the Dagons and Dyson Lee, they never make it to print, well that's all right too. At least they live on in our imaginations.

7 Responses to It's good to be a geek