As if having to marry Deanna Troi wasn't punishment enough, Worf the Klingon now has the dubious "honor" of having his very own onomontoPOWia: 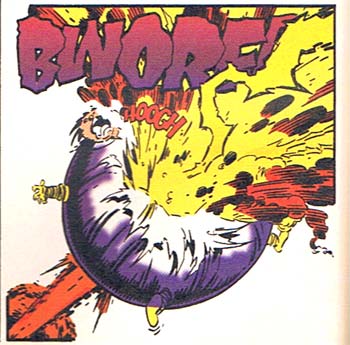 While I am sure it's nice to be memorialized, I have to wonder if having your name be the embodiment of the sound of a giant, gas-filled fat guy exploding is all that great.

What the hell am I saying, of course that would be an honor for a Klingon! Having your name associated with exploded enemies is pretty much like winning an Academy Award for those guys. Which, given the level of acting in the Star Trek universe, is, let's face it, not going to happen.

At this point, the only thing the former Enterprise security chief has left to accomplish is to track down this "Hoogh" guy the former blimp is calling out for so he can give him a bad case of the BWORFs too.

One Response to An onomontoPOWia twofer