A concerto of vampire pummelling

What is the sound of a fist hitting a vampire's face sound? Let me count them: 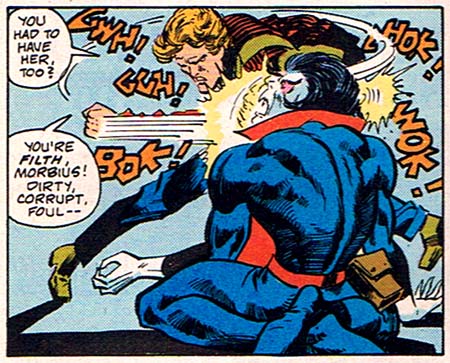 That'd be five, for those of you keeping score at home. Apparently vampire faces are quite multi-tonal. I think my favorite onomontoPOWia here is "GWH!", distinguished by its complete lack of vowels, but really, getting that many tones out of one bloodless meat bag is pretty impressive no matter how you slice it. Particularly considering the puncher is working with two broken legs, as this guy apparently is.

Seriously, what is up with the way that guy is hitting Morbius? I was so confused as to how that stance is anatomically possible that I diagrammed it in Photoshop: 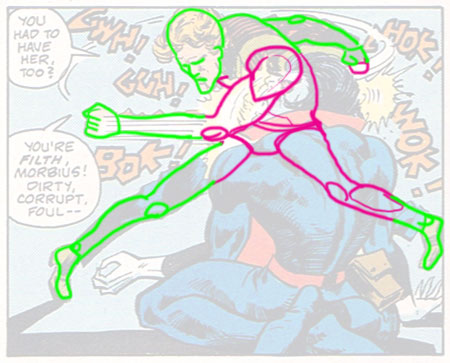 It's just barely sort of workable, if you assume that human calves can be rotated ninety degrees sideways from the knee. And if you squint, and cover up all the difficult anatomical bits with explosions.

Perhaps that is why Morbius has decided to assume the lotus position for his beating, and why he seems to be nodding so vigorously. "Ah, redhead-san, truly you have mastered the art of Zen broken-legged fighting. GWH!" I guarantee you, if more transcendental meditation classes featured pinstripe-wearing, backwards-legged detectives beating up blue leisure-suit-clad vampires, I would totally go to one.

BONUS! Morbius gets hit so hard his face turns into oatmeal, which apparently sounds like KRAM! No, I haven't ever heard anyone's face make that sound while hit, but then I've never seen anyone hit a vampire, have you, Mr. Smartypants? I thought not! 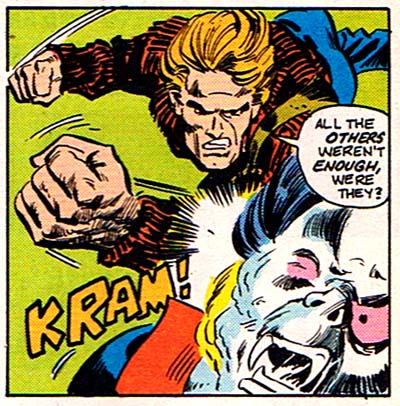 3 Responses to A concerto of vampire pummelling