I ironically ended up making a new character (or at least a highly edited old character) on the same day that I said was going to be inactive for a while.

This is the Magician, Phillip Magus.

Magus was an famous stage magician. From an early age, he showed himself to be a mean, cruel person, but extremely intelligent and highly skilled at creating artificial illusions. Then, one day, Magus was going home after a performance when an old man came up to him and congratulated him. He then snapped his fingers, and transported both himself and Magus to what seemed an empty void.

“we are not truly here, mister Magus,” said the man. “We are there. This place exists not, outside of our minds. It is but a complex illusion.” The man underwent a transformation, revealing himself to be the devil. “I am, if you have not noticed, the devil, though you may know me by one of thousands of other names. At any rate, I will give you powers to create these intense illusions, allowing people to see virtually anything, as well as the abilities to transport yourself anywhere on Earth you can think of, and to enter the mind of any human being, learning their fears, their desires, everything. You will essentially be able to manipulate almost anyone on Earth to your will. All you have to do is give me your soul.”

Barely thinking about it, Magus agreed to the offer, giving the devil his soul in exchange for the powers the devil had mentioned. Now, Magus, calling himself the Magician, uses his abilities as he pleases, mostly to gain power, money, or influence, as well as because he finds it extremely amusing. He is one of the most dangerous human villains in my universe, as only a select few humans can naturally withstand his power, though anyone can withstand him with certain exceedingly hard-to-make devices, or through training so intense that only two people in my universe (whom I haven’t even created yet) can resist him without powers or devices (the only characters I have created so far who can naturally withstand the Magician are Cerebrum, due to his advanced mental abilities and the Electric Eel, due to not being a human.) 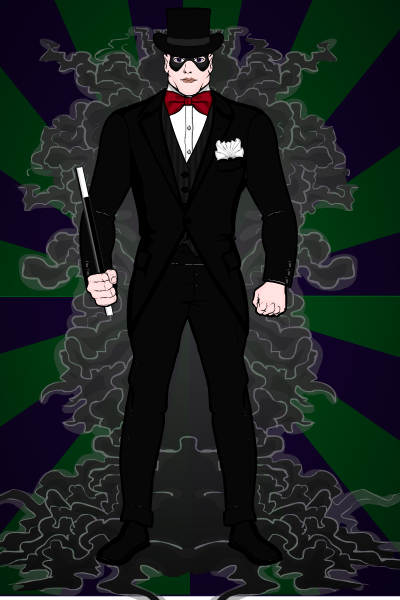