Here’s a character I’ve been messing around with for months now, adding bits and pieces here and there whenever I had a minute. 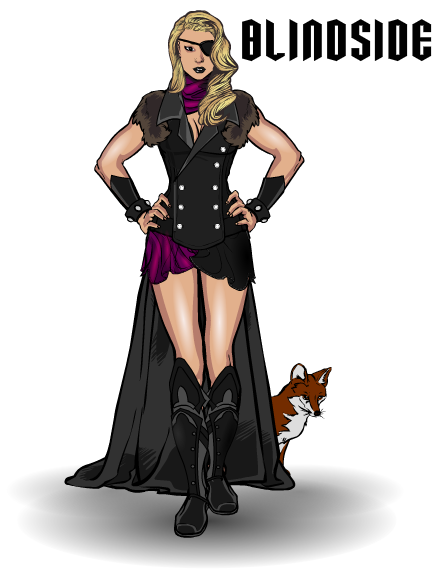 An attempt at a take on the classic sultry femme fatale who just so happens to shoot lasers out of her eye….Get it?…Blindside?….I know. *Hangs head in shame*
Blindside comes from a batch of character, including the Emerald Emperor, Prowler, Icarus etc that I originally made years ago and gave them the first name I thought of, not intending to ever do anything with them ever again. Blindside had a patch over one eye, so she was named Blindside…I probably could have come up with a better name if I had actually spent some time on it but I’m lazy with names.

Blindside is the Emerald Emperor’s top agent and the lover of his younger brother, the arrogant and egotistical Glorious. The two often plot to take power from the emperor but rarely follow through with their plans, mostly out of fear of the hellstorm of retribution the Emperor would reign down on them if their plan failed.