What Were They Thinking?: A Song Of Fire And Snow

So, last week on What Were They Thinking? (the place where we look at all of the stupidest and most ill-advised things in all of comics history) we talked about the New Guardians, specifically the villain in the first issue of their series, who was a vampire who infected non-caucasian people with AIDS when biting them. However, I also mentioned the villain of the second issue of the New Guardians series in passing as a further example of the series idiocy. Well, in for a penny in for a pound, we might as well take a look at this guy whilst we can, so Ladies and Gentlemen let me introduce you to Snowflame. 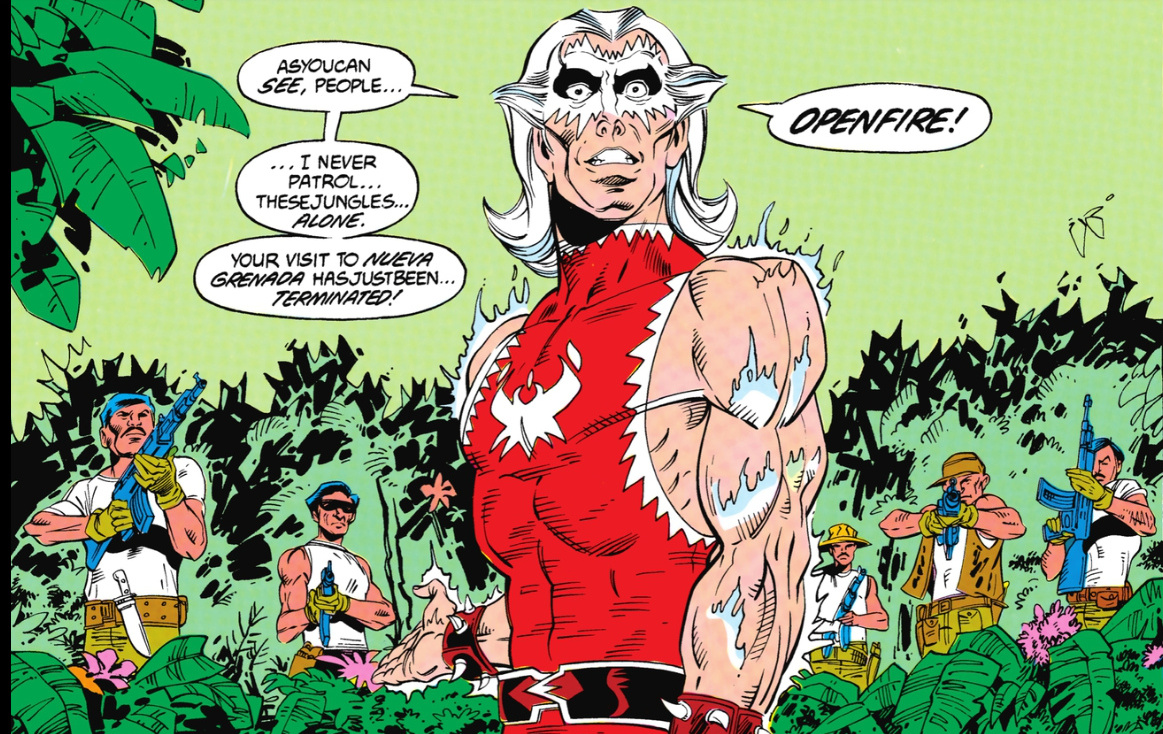 So, considering that the series started off strong with a racism AIDS vampire, there was only two ways the New Guardians comic could go with the second issue. They could either calm it down or they could go balls to the wall insane. Yeah, guess which one they did. Yes, that is a man gaining superpowers by snorting cocaine. Apparently ingesting the Class-A drug gives him increased strength and speed, immunity to pain and the ability to create white fire across his body, oh and his touch makes people high (not kidding). He's the leader of a drug cartel, which gives him a nice and conveniant supply of power powder, and is a suprisingly sensible villain in that he has competant henchmen who patrol via stealth rather than clomping around militaristically and he wins his first encounter with the heroes by just ordering his troops to shoot them (novel idea, turns out that not all superheroes are bullet proof, whodathunkit?). Then it goes down hill. He gets humiliated when the heroes return and then gets betrayed by his own people and thrown into a soon to explode shed. That's two for two. I might have forgotten to mention last week that Hemo-Goblin dies of AIDS at the end of issue 1 (which is a fail on his creators part), so both villains in the series so far died from their own actions. Oh and this issue is also notable because some of the members of the New Guardians actually develop AIDS from the fight with Hemo-Goblin, which was bold, and is a background plot point throughout the series (all 12 issues), though it only really comes to the forefront in issue 6 when it is a contributing factor to the death of one of the New Guardians.

But, I think I've gone off track, let's just return to Snowflame shall we. This guy snorts cocaine and gets superpowers from doing so. Did anyone at DC think that this might not be a good idea to put that into print. Drugs in comics only really work when you are explicitly showing that drugs are bad and a destructive force. DC themselves even once had to cancel a series after the first issue because it was felt that the series showed drug use in a positive light (Brother Power, The Geek- 1968 incase anyone is interested). Both of the best drug related storylines of all time (The Amazing Spider-Man 96 May 1971 and Green Lantern/ Green Arrow 85-86 September the same year) both saw characters close to the heroes become hooked on drugs (Harry Osborne to pills and Roy Harper to heroin) and both suffered horribly for the addiction (Harry overdoes and ends up in a coma, whilst Roy ends up broke and living in slums resorting to crime to pay for his next fix). Meanwhile, you have Snowflame here taking Cocaine, which is a class A drug same as Heroin, and not only suffering no ill effects but actually gaining from the experiance. Yeah, it's great that the heroes are shutting down a drug cartel and sure the cocaine addict dies in the end, but not from the drug. Nothing about this says that cocaine is a bad drug other than by association. On one hand here you have "drugs are bad because this guy is fighting superheroes and he likes drugs" vs. "DRUGS ARE AWESOME BECAUSE THIS GUY SNORTED COCAINE AND NOW HE HAS SUPERPOWERS!" It is simplified but that is basically what you can take away from this issue, Do Drugs Everyone They Give You Superpowers *MASSIVE SMILEY FACE*

For everyones information, here's what cocaine does to you in the short term after the high:

And in the long term:

That is not a drug that we want to glorify. There's a reason it is in the highest tier of banned substances. You just need to look at a picture of a coke addict to see that it isn't something you want to be messing with. So why make a character that gains superpowers from it. Yeah, his whole power set is a play on the feeling an addict gets when taking the drug, but to not show the negative side in a medium that is osstensibly aimed at children and teens, groups to whom this might be their first exposure to the drug, is stupid and irresponsible. Makes you wonder if the writers were on coke. And yeah, this was another character created by Steve Englehart, for shame.

5 Responses to What Were They Thinking?: A Song Of Fire And Snow