What Were They Thinking?: A Boat-Load Of Trouble

Now, I feel I should start this weeks What Were They Thinking? (the place where we take a look at the stupidest, most ill-advised things in all of comic book history) with a caviat. We are talking about a single character this week and not a very long lived one either, with all of this characters appearances taking place in the 1940's. As I am sure everyone is aware, attitudes in the 1940's were quite different to what they are now and that does go some way to explaining why this character is so terrible. However, I am still going to talk about it, because we are not talking about some jingoistic war-time anti-Japanese propaganda (though that is unacceptable as well) or any of the numerous Nazi villains, those are somewhat understandable and, in context of the time, somewhat excusable. This character though, is not. And it happened with all the right intentions as well, which makes it even worse. So, this week, we're going to talk about Fawcett Comics and how they sunk their own Steamboat. In 1940, Fawcett Comics had just hit the superhero scene hard with the introduction of their flagship superhero, Captain Marvel. The character was an instant hit, but was competing against the established and vastly more popular character of Superman of Detective Comics Inc. so they decided they needed something else to attract new readers, readers that DC had yet to capitalise on. And what they did was amazing in how progressive and forward thinking it was. They decided to introduce a black character and attempt to appeal to the African-American audience. Bearing in mind this was some 32 years before DC introduced their first major recurring black character, John Stewart (in 1972) and some 27 years before Marvel's first African-American character, Joe Robertson (though they had introduced a black character in Black Panther a year prior in 1966, 26 years after Fawcett). This was at a time when Jim Crow was still in full effect, black people were legally required in many southern states to sit at the back of buses and use seperate entrances to public buildings and toilets to white people and the army still had segregated units. So Fawcett was taking a really big gamble and making a big statement by introducing one of the first black characters in comic book history.

It all sounds great right? So why am I talking about it then, on WWTT of all places. Well.... I would like everyone to meet Steamboat, he's the guy I've been telling you about. 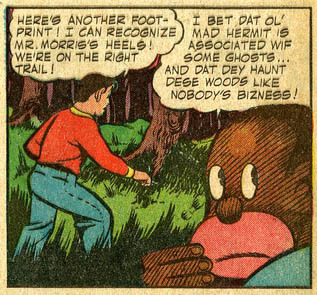 I mean, black-face was and is a thing and I'm sure anyone can tell you that it isn't exactly the most flattering or appropriate way to portray people of colour. But this is the 1940's so what did we expect. There's an expression, a broken clock is still right twice a day. It's used to say that someone stupid can still do something right once in a while. Problem is, there's a bit missing. A broken clock may be right twice a day, but it's still broken. Fawcett may have been making a big step forward by including a black character, but they did it in the most racist way possible.

So, Steamboat. As one might expect from his appearance, the writers sparred no stereotype. Steamboat is Captain Marvel/ Billy Batson's increadibly stupid side-kick/ manservant (we'll get to that)/ driver/ pilot (which makes no sense seen as Captain Marvel can fly) who only got work from Batson when Captain Marvel accidentally put him out of work whilst trying to fight crime (Steamboat originally worked as a Steamboat captain, so they obviously thought long and hard about the name/ job thing) and took pity on him. And lets just go back to the whole manservant thing. I know that the whole white-master/ black servant thing is over-done and over-blown in terms of how racist it actually is, but they were trying to appeal to a black audience with this. So let's put him in a subserivant position to a white child, because black people love that imagery don't they. And his whole thing was that he was utterly useless, a bumbling fool. Yes, it's classic comedic side-kick stuff, but could they have gone any deeper into the offensive stereotypes list if they tried? Here we have the ignorant/ stupid ****** trope, with the fat lips that make up half his face and harken to the horrifically offensive black jester image, who works for a white person in a servant capacity. The only thing they missed out was the hypersexualisation, which they probably dared-not-do because they were marketing to children.

Steamboat managed to last for 12 issues before the Fawcett offices were visited by groups of black readers who protested against how offensive the character was, so he was removed for the comic. So, yeah. Don't really have much else to say about this one. It was a great idea ruined by the execution and ended up alienating the audience it was meant to entice. I mean, sums up the comics industry pretty well doesn't it.

5 Responses to What Were They Thinking?: A Boat-Load Of Trouble