Anime Talk – WorldEnd: What Will You Do At The End Of The World? Are You Busy? Will You Save Us? – Mid-Season Review. 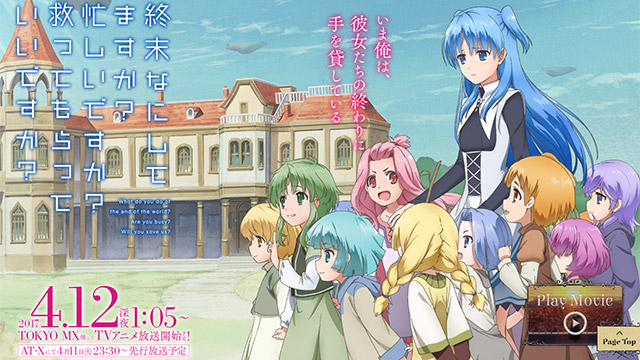 Welcome everyone to the first Anime Talk I have written in a long time! I want to start off this edition by saying I will be making some changes to my review style. In the past I tried to write as if I were some "professional anime reviewer" and lets face it I'm not! I am just a simple  anime fan and a very so so writer. So now my reviews will be far more casual, like I was talking to a buddy about the show I just watched. I'll leave the more elegant writing in the hands of our other much more capable moderators and blog authors!  So with that said let's get into my review.

So today I want to talk about an anime with a very huge mouthful of a title. WorldEnd: What are you doing at the end if the world?, Are you busy? Will you save us? .....  Yeah that's a true mouthful right there!!! But it is a very good anime .. well so far it is anyway. You see we are only 5 episodes into the season of what I presume will be 12 episodes.

The show is about the last surviving human, the humans seemingly having be wiped out long ago by some huge monsters they were at war with. Anyway we are following the last human now living in a world controlled by various anamorphic humanoids; lizard people, cat people, ect. and faerie-esque creatures that are also at war with the same monsters as the humans were.

Without spoiling too much, the show so far is basicly a high fantasy adventure meet, romance story, and a bit of boy saves girl while girl saves guy kind of thing. It is very (so far) story driven though there is some action to be had but being a huge Mark for Romance and slice of life anime I am more then glad to see this anime rely more on storytelling and not on "fanservice" ( fanservice being more than just T&A ). Since we are only halfway through the season I have to say that the jury is still out on this one though I am really enjoying it so far, but If you like romance stories set it a fantasy world that revolves  emotional as well as physical conflicts that throws in just enough action to keep you satisfied that Give "WorldEnd: What are you doing at the end of the world? Are you busy? Will you save us?" a try.

3 Responses to Anime Talk – WorldEnd: What Will You Do At The End Of The World? Are You Busy? Will You Save Us? – Mid-Season Review.