What Were They Thinking?: Ultimate Stupidity

Here on What Were They Thinking we like to look at the stupidest, most ill-advised things in all of comic book history. And, as you might expect, cross-overs are always a good place to look for this kind of behaviour. They are the home of such "classics" as the reality punch, two year long clone conspiracies and wars between superhero teams. But which cross-over is the worst of all time? That is a hard question to answer, but I think we can all agree that the title would have to go to Marvel. I mean, they are the people responsible for Civil War, Avengers vs. X-Men and the subject of todays missive, the story which may just take the title of worst cross-over. I am, of course, talking about this... 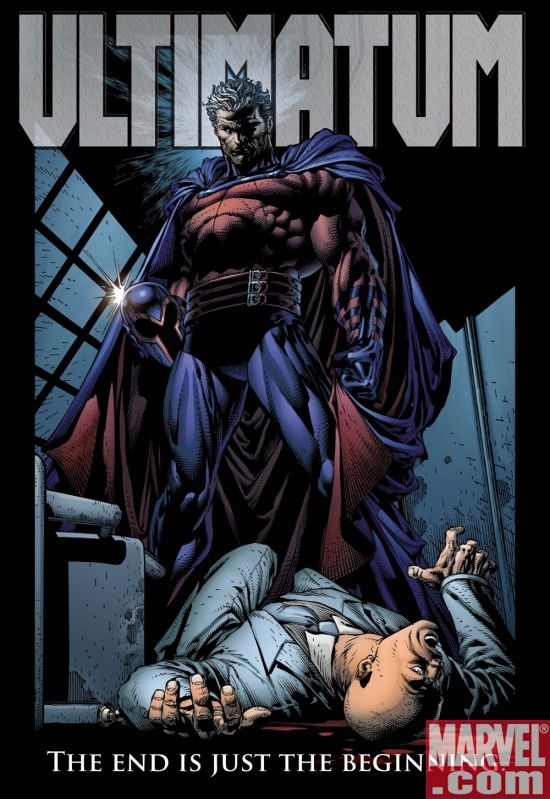 Now we've touched on how bad the Ultimate Marvel Universe became back on the second WWTT of the revived series, when we covered Ultimate Quicksilver and Scarlet Witch's (possibly) incestuous relationship. But I think today is the day we go into detail.

So, to kick understand what we're dealing with here, we need a bit of backstory. In the early 2000's Marvel had an idea. They thought that new readers would have a hard time finding a starting point for series that had been in print for 40 odd years (titles like Spider-Man, X-Men and The Avengers), so they thought that they'd update these characters and bring them up-to-date with new origins for the 21st century. Now, that sounds awful if you're a long time DC reader, because you automatically think New 52 or Zero Hour (which was more relevant at the time as the New 52 hadn't happened yet). But this isn't DC we're talking about, it's Marvel and they decided to launch the reboots as completely seperate titles in a new universe, the Ultimate Marvel Universe, that would run alongside their previous continuity and neither continuity would affect the other. And, amazingly, it was a genius move by Marvel (who at that point hadn't had a good idea in a decade). They launched Ultimate Spider-Man, Ultimate X-Men and The Ultimates (aka Ultimate Avengers) to great sales and almost universal critical acclaim. The characters were given new leases of life and the stories were new and fresh.

But, Marvel are Marvel unfortunately, so a good thing could never last. We had the aforementioned (possible) incest between Quicksilver and Scarlet Witch, but that was just the beginning. The real issues started with Ultimates 3 and once again centres around the incest siblings, although not their bedroom related habits. Instead, both were killed off, Wanda by Ultron and then Petro by Hawkeye (irony for Age Of Ultron movie). Oh and because this is a WWTT I must also mention that Ultimates 3 also sees Tony Stark and Black Widow make a sex tape which is then leaked because Iron Man has to be at the same level as Kim Kardashian. Anyway, back to the story. As you might expect, Magneto isn't best pleased about his kids deaths (appart from the fact that in the Ultimates Universe, they might actually be Wolverine's kids, but lets ignore that) and swears his revenge, also stealing Thor's hammer. Oh and the whole thing was orcastrated by Doctor Doom. And that's where Ultimatum comes in.

Ok, now lets do a slightly longer plot synopsis. Magento flips the Earth's magnetic poles and causes massive natural disasters. In trying to save New York, Daredevil, Dazzler, Nightcrawler, Beast and Franklin Storm all die, Susan Storm is put into a coma and Johnny Storm goes missing. Captain America ends up on life support and Wasp gets eaten by Blob, who in turn is then eaten by Hank Pym because every good turn deserves another. Thor then ventures to Valhalla to reclaim the soul of Valkyrie, who has also died, meets up with Cap's soul (so he's dead too now) and gets into a fight with Hel. Thor dies saving the souls of Cap and Valk and both go back to the land of the living. Oh, and then Prof X and Magneto have a confrontation and Magneto does the unthinkable and kills his friend.

Magento then sends clones of the Multiple Man out to bomb major targets across the world. This is prvented by Hank Pym, who in turn dies, but not before Emma Frost, Captain Britain, Cannonball, Cypher, Polaris and Sunspot have all been blown up. Doctor Strange's home is then attacked by Dormammu, who doesn't want to be left out of the fun and is also using Human Torch's flame (isinuating that he has killed Johnny Storm), and Doctor Strange dies. The remaining heroes attack Magneto's base and Sabretooth immediately kills (and tries to eat) Angel, and is then in turn blinded by Hawkeye. Magneto gets his arm cut off by Valkyrie and, in return, kills Wolverine by ripping the adimantium from his bones (which Wolverine can't regenerate from in the Ultimates Universe). Then Nick Fury turns up, tells Magneto that mutants were a failed Supersoldier experiment with the help of Jean Grey's telepathy, Magneto gives up, reverses the damage he's done to the poles and gets his head blown off by Cyclops, because that isn't what Xavier would do.

So, with all the disaster over, you'd expect everything to calm down right? Wrong, Cyclops gets assassinated by Quicksilver, who it turns out is alive after all and plans to carry on Magneto's work, and Thing kills Doctor Doom on Reed Richards orders as punishement for causing the death of Scarlet Witch, which was the catylyst for everything in the first place.

So to recap, this was basically an excuse to kill as many characters as possible in the most over-the-top ways possible. Just reading a synopsis of the "story" is enough to make you laugh at how unbelievable unnecessary everything is. The story kills off every major X-Man other than Jean Grey, Storm, Rogue, Shadowcat and Iceman, the two most important villains in the Ultimate Universe in Magneto and Doctor Doom are both done in by their main foes, the only Avenger's who don't die at some point are Iron Man, Hawkeye and Black Widow and the Fantastic Four disband when the whole thing is over. But hey, at least it's nice to see consistancy in Marvel's treatment of certain characters, such as Cyclops. In the main universe he becomes worse than Magneto and is killed whilst trying to fight a war against the Inhumans, whilst in the Ultimates universe he decapitates Magneto, who had surrendered and was a prisoner, and is shot in the head by Quicksilver. So, points for keeping a consistant message there guys.

You know, it's pretty sad how the Ultimate Marvel Universe turned out. It started out being so amazing and exciting and then fell down the rabbit hole of the worst comic book cliches. At least they managed to pull out some decent Ultimate Spider-Man stuff post Ultimatum, but if we're being honest, that wass the only good thing to come from the Ultimates Universe for a good part of a decade. It took Marvel only 9 years to competely ruin an entire comics universe and the whole line would eventually be rendered obsolete when Secret Wars happened in 2015 and Miles Morales made his jump to mainstream Marvel continuity and the Ultimates Universe was phased out completely. You've got to wonder, could they have kept it going if they hadn't done Ultimatum. Considering that the cross-over lasted 9 months, started with pretty respectable sales of 114,203 copies and then lost 27, 000 readers over its run, and went from getting average to positive critical reception at the start of the run to utterly scathing (one critic from IGN calling it the worst comic he'd ever read) by the end, you've got to think that it probably wasn't the best idea in the world.

5 Responses to What Were They Thinking?: Ultimate Stupidity