What Were They Thinking?: Because It Wasn’t A Good Idea The First Time (Or Even The Second)

So, last week on What Were They Thinking? (the place where we look at all of the stupidest, most ill-advised things in all of comic book history) we took a look at an example of DC's fascination with transformations. However, there was another storyline that I mentioned in the introduction to that edition that is also quite interesting, and segues quite nicely into this weeks topic. Back in 1970, DC thought it was a good idea to explore social issue such as racial inequality and racism by having one of their white characters (Lois Lane) black up and join an African-American community (read: Ghetto) called, and I'm not kidding, Little Africa. Of course, the storyline is only remembered today for the fact that you had Lois Lane using a machine to change her race and it would certainly not get published now. However, at the time, DC didn't have a major black character. It would take them 2 more years to debut John Stewart, with Marvel already having debuted Black Panther and Falcon at this point. So, DC took a white character and made them black, because why not. And that, rather neatly, leads on to the stubject of this weeks discussion, the newest member of the Arrowverse, Mr Jefferson Pierce aka Black Lightning So, why mention Lois Lane's racial change when talking about Black Lightning. Well the reasons are two fold actually. Firstly, we have to consider DC's original plan for the character. Originally, Black Lightning was to be called The Black Bomber (a name which most certainly would not be changed at any point due to real life events, not that DC could have foreseen that anyway, but I digress). Now, the unique "selling point" of this character (which was definately unique, but probably wouldn't sell) is that he would be a white man who transformed into a black superhero during times of stress (kinda like the Hulk but offensive). Oh and even better, the white guy in question would be a racist because that'll get all of the lols. A white racist becomes a black guy. I mean, I guess there's some room for hard hitting social commentary there... oh wait nope, the white guy wouldn't be able to remember what happened when he transformed, so he isn't aware he's a black guy as well. And to compound things, both of his identies would have had a different girlfriend and both girls would know about their guys dual life. And he apparently would have got this power due to a US Army experiment in Vietnam, the aim of which was to allow white troops to become chamoflagued in the jungle. So to sum up, racist becomes black guy to fight crime, has a technically polygamous relationship that he isn't aware of but both his girlfriends are and all of this is because black people are harder to see in the jungle. I think I'll defer to noted comics historian Don Markstein on this one:

"[This idea] is an insult to practically everybody with any point of veiw at all."

Luckily, DC brought in Tony Isabella to write the series and he had that rare thing in the world of comics, a common sense. Isabella managed to convince the higher ups that the idea was, how to put this, not a good one, and managed to get the Black Lightning character that we all know put into print (as a normal African-American with superpowers rather than a white guy who becomes a black guy with superpowers). But, funny thing is, DC already had the first two issues for the Black Bomber character scripted and ready to go, Isabella was meant to come in and take over on issue 3. DC were actually going to run with this if they hadn't chosen the right guy to stand up and say "guys, this is not something we should do, because it's DAMN STUPID!" Oh and before we move on, it's worth noting that the guy who had the original idea for the Black Bomber was let go by DC shortly after this. Not saying their a correlation, I'm just saying.

But, as I said, DC followed the path of sanity and Black Lightning became the character he is today. And then this happened: 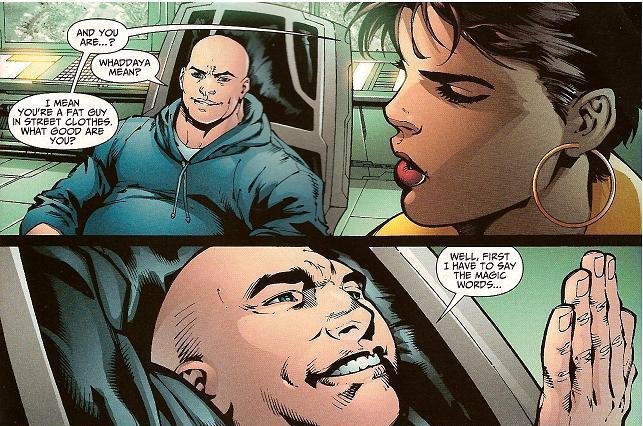 Ladies and Gentlemen, meet The Brown Bomber. Not only does he have a name that sounds like a euphemism for someone who takes monster dumps, he is an over-weight, balding, middle aged white dude, who transforms into the most stereotypical black guy imaginable by shouting the words "Black Power". And he basically gains the powers of Captain Marvel because why not. So, when do you think this character made their first appearance? 1975? The 80's? Maybe the 90's, because things got a bit stupid at that time? NOPE! This panel is from Justice League Of America Volume 2 Issue #26, which was published in 2008. Yes, TWO THOUSAND AND EIGHT, as in the same year that an African-American was voted into the White House, DC published a story that had a white guy transform into a black guy for a joke. DC, I cordially invite you to get lost, you actually can't do that anymore. You couldn't do it back in the 70's and you can't do it now, even if it is meant to be a knowing wink to comics fans. It was a bad idea the first time, when you did it with Lois Lane, it was an even worse idea the second time, it was a bad idea in 2008 and it's still a bad idea now. Last time you tried this someone got fired for it, why do it again, even as a one-off joke (that patently isn't funny). And why name him the Brown Bomber? That's not a good name, it literally makes him sound like he spends most of his time straining on the toilet. You're just.... I don't even know anymore.

4 Responses to What Were They Thinking?: Because It Wasn’t A Good Idea The First Time (Or Even The Second)