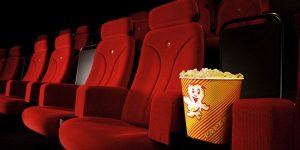 Sadly, no movie reviews this time around. I hope to change that for next week, but for now, let’s look at some of the news around the internets. There's actually quite a lot to talk about; we've got superheroes, adaptations, rumors, anime, trailers and more! So let's get to it!

We started off our week with a new trailer for the Wonder Woman film, dubbed the ‘origin’ trailer. There were some really interesting things in this trailer, including a young Diana and showing her Amazonian training. There are a few things that are especially intriguing to me: the idea that she should be trained to the extent that she is and that there is some truth that she shouldn’t know (I have a pet theory about this, but I could be way off on it). I really love one of the last shots there where she brings the gauntlets together lightning builds around them, it’s a great contrast to earlier in the trailer where their powers go off and she seems scared of it. I have hope for this one, and my little girl is really excited to see it, so I hope it all pans out.

I just had to mention this quickly. Beauty and the Beast absolutely slayed this weekend, opening at $170 million domestic ($350 million worldwide total) and knocking Batman v. Superman off top spot for a March opening. It’s already the second-highest grossing film of the year behind Logan (which passed $500 million total worldwide). I haven’t seen it yet, so I have no idea how good the movie itself is, just that a lot of people must have been excited for and/or enjoyed it. It will be interesting to see how the next round of Disney live-action does, with Mulan scheduled for November of next year and Aladdin (directed by Guy Ritchie) about to begin casting. I’m intrigued, especially since they seem to be doing all of my favorites all at once. 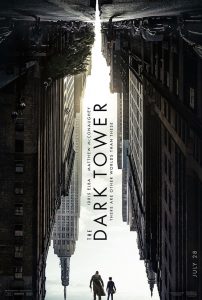 Now to another project I’m anticipating. Up till this point we have had so little regarding this adaptation/sequel-ish of Stephen King’s iconic gunslinger. No trailer yet, but now we’ve finally got a poster. I’m not entirely sure why they’ve gone the Inception/Doctor Strange angle for this, but it’s a neat visual. Especially Matthew McConaughey’s Man in Black upside down at the top, with Idris Elba’s Roland and Tom Taylor’s Jake at the bottom right-side up. As someone who loves the books, I can’t explain this choice, but I can tell you that the tagline is exactly what I thought they’d go with. It’ll bring in fans like me, even ones skeptical about the whole sequel/not adaptation of the thing, and pique the curiosity of people who don’t know what the phrase means in the context of the story. I also found an article posting a song (link is the whole thing from YouTube) that was supposedly supposed to be from the trailer that never materialized in October (though was apparently leaked. I didn’t see it either way). Again, another dark, moody cover of a classic. This one is somewhat better than the last few, at least. What makes me scratch my head is that it would be an excellent choice of song had they gone with Roland’s appearance from the book, but since they aren’t doing that, why use it? Either way, I really, really hope we get a trailer or something soon, if only to show us what we’re getting into come July. 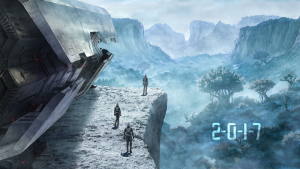 Let’s switch now from gunslingers to kaiju. Netflix is apparently working on an anime film featuring the King of the Monsters for later this year. It apparently has a more futuristic setting for the big guy to stomp through, and will be the 30th Godzilla film produced by Toho. Not many other details yet, but once there’s more to tell, I’ll be sure to let you all know. Kaiju are a big deal (pun intended) in our house, so once it’s released, I’ll definitely be checking it out. 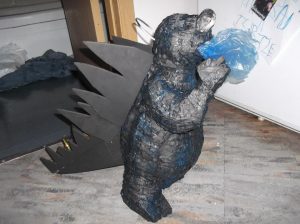 How big is Godzilla in our house? Big enough that Cookie Monster got a makeover for one of the kids' birthday parties.

What’s a movie news article without some Marvel, am I right? News is out that Sylvester Stallone and Michael Rosenbaum have parts in Guardians of the Galaxy vol. 2 in roles that are significant to the film and the greater MCU. Of course, no word on who they are playing, but there is plenty of speculation back and forth on who they could be. This video posits Stallone could be playing an incarnation of Nova, but nothing else at this time. I’m not going to speculate too much (although I could totally see Rosenbaum as The Watcher) because who knows how Marvel/Disney is going to connect things at this point. Guess we’ll just have to wait and see, unless we get another trailer that gives us something more.

So, director Luc Besson released a trailer for a trailer for his Valerian and the City of the Thousand Planets on Twitter for his birthday. It doesn’t really tell you anything new at this point. I’ll check out the full trailer on the 29th and see what happens. I’m not overly interested in this one, the first trailer made me feel like someone had smashed Mass Effect and Guardians of the Galaxy together, but in a cynical way, not a good way. So that’s there, if you want to check it out. 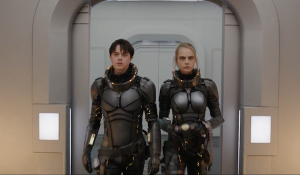 Commander Shepard would like her armor back. With the N7 logo reattached.

I’ve seen rumors swirling the past few days about a reboot of The Matrix. I am, for the record, absolutely against such a remake. Apparently now it’s not a remake, but another film set in the same universe. That I can deal with. I really liked The Animatrix, so I would be down to see more of that world that wasn’t a prequel or a retread or any of those fancy buzzwords. Because you aren’t going to recapture the greatness of that first film, so I’d much rather see other parts of this world and other stories.

One final note to music and especially heavy metal fans. A favorite of ours, Unleash the Archers, has a new album coming out that you can preorder now! I already did, and I cannot wait to get my hands on it (my preorder said shipping to arrive June 2nd). Just had to share some love for Canadian metal.

Well, that’s what I’ve got for this week, everyone. What do you think of some of these rumors/stories? Anything exciting, anything make you want to tear your hair out in frustration? Next time I’ll hopefully have some new reviews, Power Rangers is out next weekend, as is Life, or might hit up Beauty and the Beast, depending on how much time we have. See you then!