What is "Greatness"? Well, when talking about Popular Culture, you have to judge it on the impact the subject in question has had on our collective mind-set. When you look at the Greatest Musical Artists of All Time, you are more than likely going to see Elvis Presley, The Beatles and Michael Jackson on the list. Likewise with films, you're going to see Casablanca, Gone With The Wind and The Godfather. Whether you like them or not, they have made a huge impression. But then you also have the subjective side to the argument, the placement. Who actually is better, Elvis or The Beatles? Yes, you could answer that by looking at stuff like sales, but you can't quantify a persons reaction to the music. And that is the key factor.

So how to select the greatest alien race in fiction? Do you, a) set out a strict list of criteria that must be met in order to qualify something that is invariably subjective? Or do you b) just let people go with their instincts? Well, we went with the later and now we have our list. Close runners up include, The Flood from the Halo franchise, the Saiyans from the Dragonball franchise, the Kryptonians of DC and the Martians from War Of The Worlds.

The most recognisable alien race in the last 10 years of video games, thanks mostly to Garrus Vakarian, the recruitable team-mate and fantastically awkward potential love-interest for the player. Turians have a unique look that is part insect, part reptile and part human and follow a number of the classic alien race sci-fi tropes, being highly regimented, military focused and with a deep sense of honour. The third race to join the Citadel Council (the governing body of the huge, multi-cultural Citadel space station and effectively the governing body of the galaxy due to the number of species involved) the Turians also provide the majority of the peacekeeping force for the council, making them one of the most important races in the Mass Effect franchise. And the don't have a great fondness for humans on the whole, which is almost a prerequisite for being a great alien race.

Possibly the ultimate hunters in the galaxy (and a contender for the deadliest alien race in fiction), these creatures (whose true species name is unknown, but has been given as either the Yautja or Hish-Qu-Ten in their expanded universe) are highly intelligent, incredibly durable and resistant to pain, super-strong and nimble, able to camouflage themselves and have heat vision, so hiding from them isn't going to do much good unless you can disguise your body heat. So not something you really want to find yourself being hunted by, unless you have a handy chopper nearby that you can easily get to. And as Arnie so eloquently pointed out, they aren't the prettiest of creatures.

Alternately known as the Guardians of the Universe, these short, blue humanoids are the founders and leaders of the Green Lantern Corps. Originally resembling blue skinned humans with black hair, they originated from the planet Maltus, but moved to Oa (the planet at the centre of the universe) in order to protect the universe in penance for Krona's attempts to view the creation of the universe, an act that created the multiverse and created entropy in the universe. Functionally immortal, they can control the green aspect of the emotional spectrum, manifesting its self through willpower, and have otherwise forsaken emotions. So, they're pretty important in the whole scheme of things when it comes to the DC Universe. I mean, without them Guy Gardner wouldn't be a thing and I'm sure nobody would want that...

About as stereotypical an alien race as you'll find on this list, the Skrulls generally stand around the same height as humans, but are distinguishable due to their green skin, pointed ears and ridged lower jaws. They started out as a thinly veiled analogy of Cold War paranoia about communist spies being hiding in American society. Since then, the Cold War has ended and the Skrulls have mainly become religious zealots, so nice to see Marvel changing with the times at least. Able to shapeshift into anything within the range of 3 quarters to 1.5 times their original size and volumes. They have been part of many important storylines in Marvel history, from being the first alien race to fight the Fantastic Four, to their on-going war with the Kree, to their failed invasion of Earth by disguising themselves as various superheroes, they're persistent to say the least. Not even their homeworld being eaten by Galactus has stopped them. 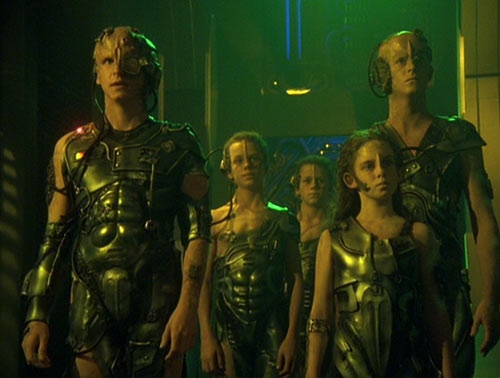 This list has now been assimilated into the collective. Resistance is futile.

Unique amongst all the species on our list, the Borg actively incorporate members of other species into their own through a process of injecting nanoprobes into their captives and surgically grafting on cybernetic parts. A hive mind, The Borg act much like an insect colony, with numerous drones serving a queen. Originally human-like creatures, they evolved and eventually became partially synthetic in the pursuit of perfection. Either way, they found two very perfect catchphrases.

You will be assimilated.

(yup, I did do that paragraph in Klingon and no, I'm not telling you what it says).

Isn't it so fitting that the Vulcans and the Klingons ended up tied on the poll. As, I said in the Klingon entry, I'm surprised that they weren't higher than 4th on the list. I mean, is there a more iconic character in the series but Spock? Yes I know he's only half Vulcan, but still. Another race that gave up emotions, this time to focus on living by logic and reason, which is probably a good thing when considering that they can experience such extreme emotions that they can be driven to insanity or murderous rage by sexual desire. They also hold the distinction of being the first species to make first contact with the human race in the Star trek universe, which is something as that universe contains a lot of aliens (see previous 2 entries for examples). 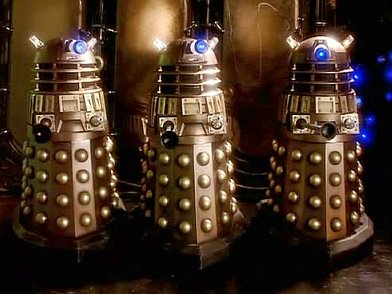 Another genocidal cybernetic alien race, another classic catchphrase. The oldest creation on this list, the Daleks have been around since 1963 and have been making Exterminating everything they come across (except a certain Time Lord) ever since. Based on the Nazi's and floating dustbins, they are literally the only way you can make a sink plunger scary. The actual alien is a mutation of the human-like Kaled, who devolved and mutated due to the effect of the radiation released during their thousand year war with the Thals. The mutants were then encased in a protective, weaponised casing by the mad scientist Davros, who removed all emotion from them, save hatred. So popular were these moving salt-shakers that it saved the fledgling Doctor Who from being cancelled, allowing it to become the longest running science-fiction TV show in history. Which isn't bad for a bin with an egg-whisk and a sucker. 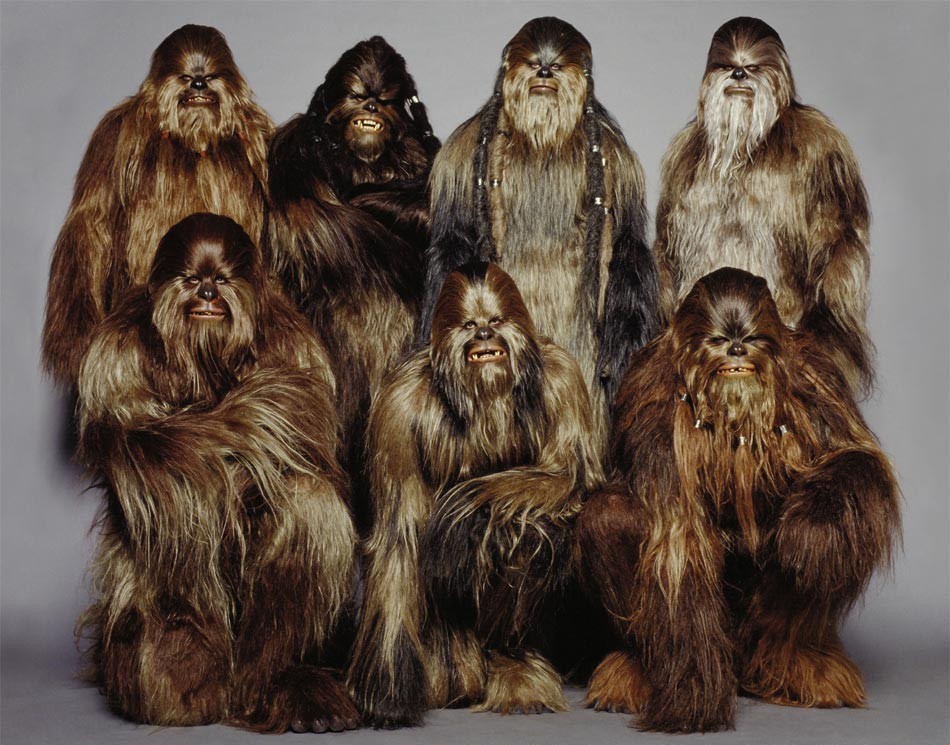 I get the feeling that this one is purely based off of one member of the species. I mean, unless anyone is actually counting the 5 minutes of screen time they got in Episode 3 or that God-awful Christmas special. But yeah, hailing from the planet Kashyyyk, generally standing around 7ft tall and exclusively covered in copious amounts of hair, Wookiees are intensely loyal and unparalleled amongst humanoid species in terms of sheer physical strength (which is why you should always let the Wookiee win people). They also make for very good co-pilots of fast-than-light spaceships that can make the Kessel run in less than 12 parsecs and are very good at putting protocol droids back together (well, I say very good), which is something I'm pretty sure George Lucas' dog, Indiana, can't do. And, so it turns out that the greatest alien species is the star of the alien franchise, whodathunkit. I am a bit surprised that the Xenomorphs placed number 1, especially over the Klingons and the Daleks, but it is understandable. Easily the most alien of any of the aliens on this list, these creatures are, to put it lightly, terrifying. They are scary in the same way that a shark is, they have no remorse, they cannot be reasoned with and you are more than likely going to die horrifically if one decides to hunt you, unless your name is Elene Ripley that is. Most aliens in fiction are at least partially humanoid, as it allows for the audience to connect with them in some form, whilst the differences show us that they are in fact alien. However, with the Xenomorphs, there's nothing human, just that terrifyingly sexual and predatory design curtesy of Mr Geiger. And I'm going to make a guess at that being the reason for their placement. They are the most alien of aliens and they are still the scariest.

So that's the list, as voted for by you guys. What do you think? Anyone that you feel should have got more votes? Am I the only one who wants to see a Klingon/ Dalek war now? Or maybe just a Xenomorph taking on some Daleks? Let us know in the comments below.

This entry was posted in Comic Book Stuff, Lists, Movies and TV. Bookmark the permalink.

4 Responses to The List: Top 10 Greatest Alien Races In Fiction