The List: Top 10 Greatest Sci-Fi Films Of All Time

So, this poll was... interesting (and divisive). I don't understand the way you guys vote sometimes. For example, Star Wars Episode 3 got more votes than such classics as Planet Of The Apes, The Thing, Close Encounters Of The Third Kind, Aliens or Serenity (which I'd have thought would have got a whole lot more votes, considering how popular Firefly still is). Of course, none of these films have made the list, alongside other classics of cinema as Terminator 2 and Star Trek the whales one (as it was put on the poll).

So without further ado, let's jump into the list.

Oh and sorry Worf, there's a lot of Star Wars.

I'm disappointed at how low this film came to be honest. Yes it is hard going at times, it's a Stanley Kubrick film after all, but it is a true classic of the genre. Dealing with themes of human evolution, the dangers of artificial intelligence and existentialism. It has one of the most recognisable scores of all time, some of the most iconic scenes of all time and is one of the few Science Fiction films inducted into the National Film Registry by the Library of Congress (in fact being only the 2nd Sci-Fi film inducted). It also holds honours of being voted by critics and directors alike as one of the top 10 films of all time in poll done by Sight & Sound magazine (published by the British Film Institute) and toping the list of The Moving Arts Film Journal's list of the greatest films of all time. So yeah, pretty influential this one. And now for something completely different. Science Fiction, as a genre, can take its self too seriously, dealing with hugely philosophical themes, such as the meaning of existence and the pointlessness of the human condition. Yeah, this film does none of that. A wonderful parody of the genre, featuring riffs on Star Wars (obviously), Star Trek, Alien and Planet Of The Apes, it contains a Winnebago spaceship, a narcoleptic prince and the most evil President in the history of everything (until November possibly, joke, apply as dictated by your own political leanings). Oh and it features some guys you might have heard of who are quite famous for being very funny, so that's always a plus. 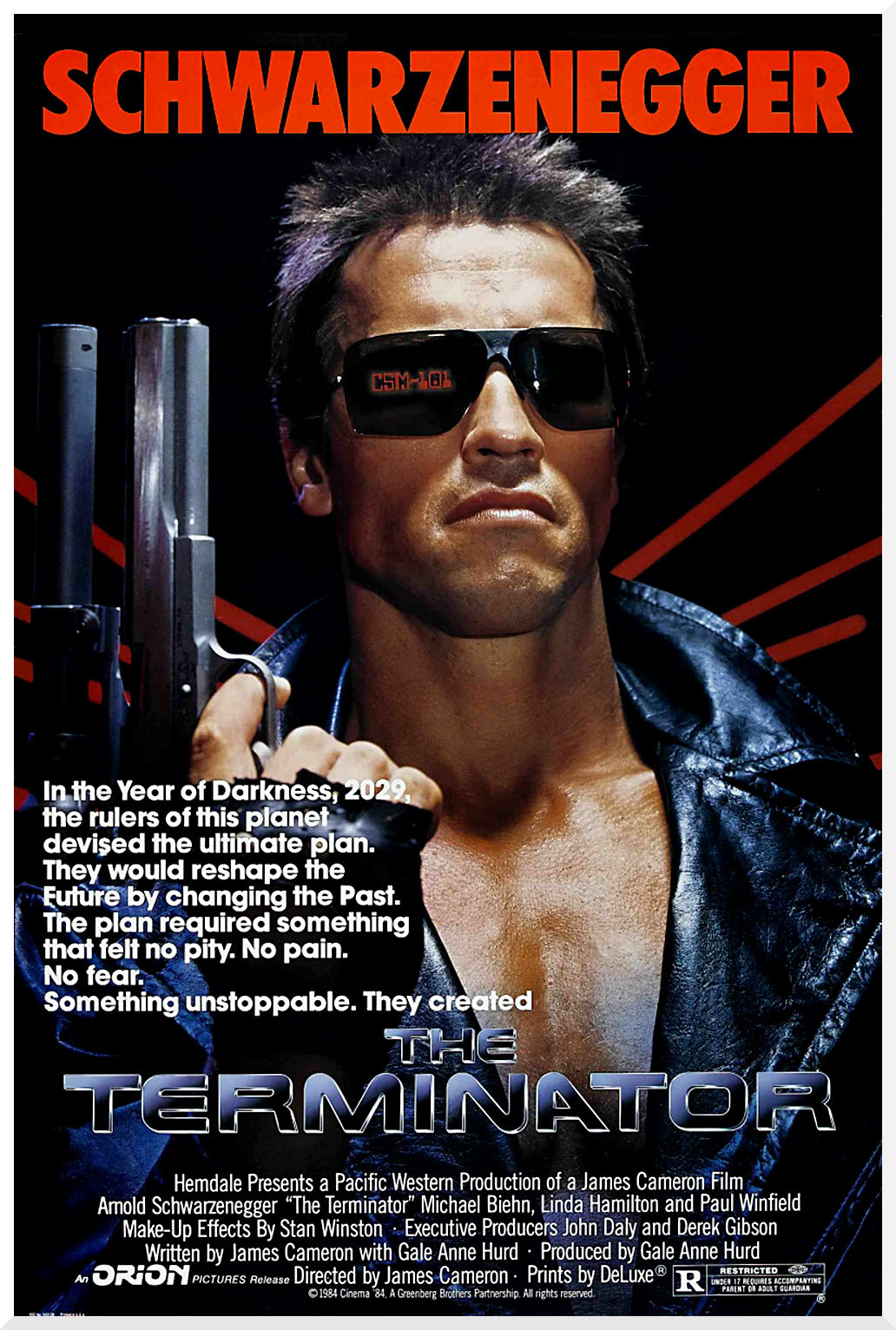 The 80's were a good time for action movies and a pretty good time for sci-fi as well. So you take the most action movie guy you can find not called Sly and turn him into a robotic killing machine and what do you get? Well and instant classic of course. Heavily focusing on the action but including enough guff about time travel, artificial intelligence and killer robots to justify the science part. Yes, Arnie would be back and then he would be playing the hero in possibly the best sequel of all time (?) but no-one can deny how effective he was at being a terrifying, unstoppable force in this movie.

And this was the directorial debut of some guy called James Cameron. You might not have heard of him, he didn't do much afterwards apart from a movie about scary aliens, a movie about blue aliens and a film about a boat.

Jabba The Hutt, Ewoks and Princess Leia in a metal bikini (and Luke probably wants to forget about that after the major reveal of this film). Arguably the weakest of the original Star Wars trilogy, it still wraps up that third of the saga with a bang (literally) with the final destruction of the Galactic Empire (until the First Order happened anyway) and the death of the last two Sith Lords (we assume because we don't know what Supreme Leader Snoke is all about yet). Oh and Han didn't die at the end like Harrison Ford wanted, which is nice. 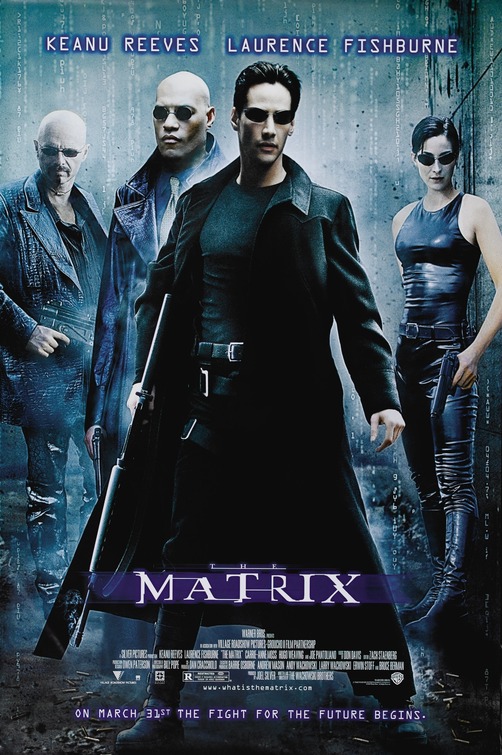 I believe this one might be the subject of some controversy at some point in the comments, because it's become very popular to hate the film due to its terrible sequels. Plus it uses prophecy and that's a no-go. But this film is very good. Keanu Reeves puts in his most believable performance since playing Ted in Bill and Ted's Excellent Adventure (should have put that on the poll. It has time travel. *shrugs*), Laurence Fishburne plays mentor figures very well and Hugo Weaving is always great. Dealing with, again, themes of artificial intelligence and existentialism, it also changed action movies with its highly choreographed fight scenes and use of slow-motion. And, surprisingly, this is another one that's been preserved by the Library Of Congress. Well, it was obvious this one was a shoe-in for the top 5. The best film of one of the most beloved TV shows of all time featuring some of the most recognisable characters in pop culture and possibly the best villain the franchise ever had. Yep, that's on the list. Also, it has one of the most memorable scenes in the history of sci-fi, which sees basically the mascot for the series die. It's a scene so good they couldn't help ruining it in the rebooted movie series.

Speaking of iconic scenes... surely I don't even have to say which scene I'm talking about here. If you've seen the film you know which scene I'm talking about, if you haven't seen the film, you probably still know what I'm talking about because the freaking chestburster is that damn iconic. So, this film has Sigourney Weaver in probably the best female role in any film ever, one of the most iconic and terrifying monsters of all time as designed by H.R. Giger (Mr "Everything must look horrifically sexual" himself) and directed by Ridley Scott. Tense, thrilling and enthralling all at the same time, it is a masterpiece of both the horror and science-fiction genres. Plus it has the best tagline of any movie ever.

The beginning of one of the most impressive pop culture phenomenon's of the last century. I've used the word iconic a lot in this list and I'll use it some more now because everything about this film is iconic. The opening crawl, from the text explain the backstory to the Star Destroyer chasing the ambassador ship over Tatooine. Iconic. The scene of Luke staring out over the desert under the twin suns. Iconic. Darth Vader. Iconic. The Millenium Falcon. Iconic. R2-D2. Iconic. The Death Star. Iconic. Peter Cushing. Iconic. The trench run on the Death Star. Iconic. Yes it's all heavily derivative of other older fantasy works and yes, they contradict a lot of the exposition given early on in this film in the next film, and the film after that, and the prequels. But still, a lot of people got into science fiction through Star Wars and this is where it all started. 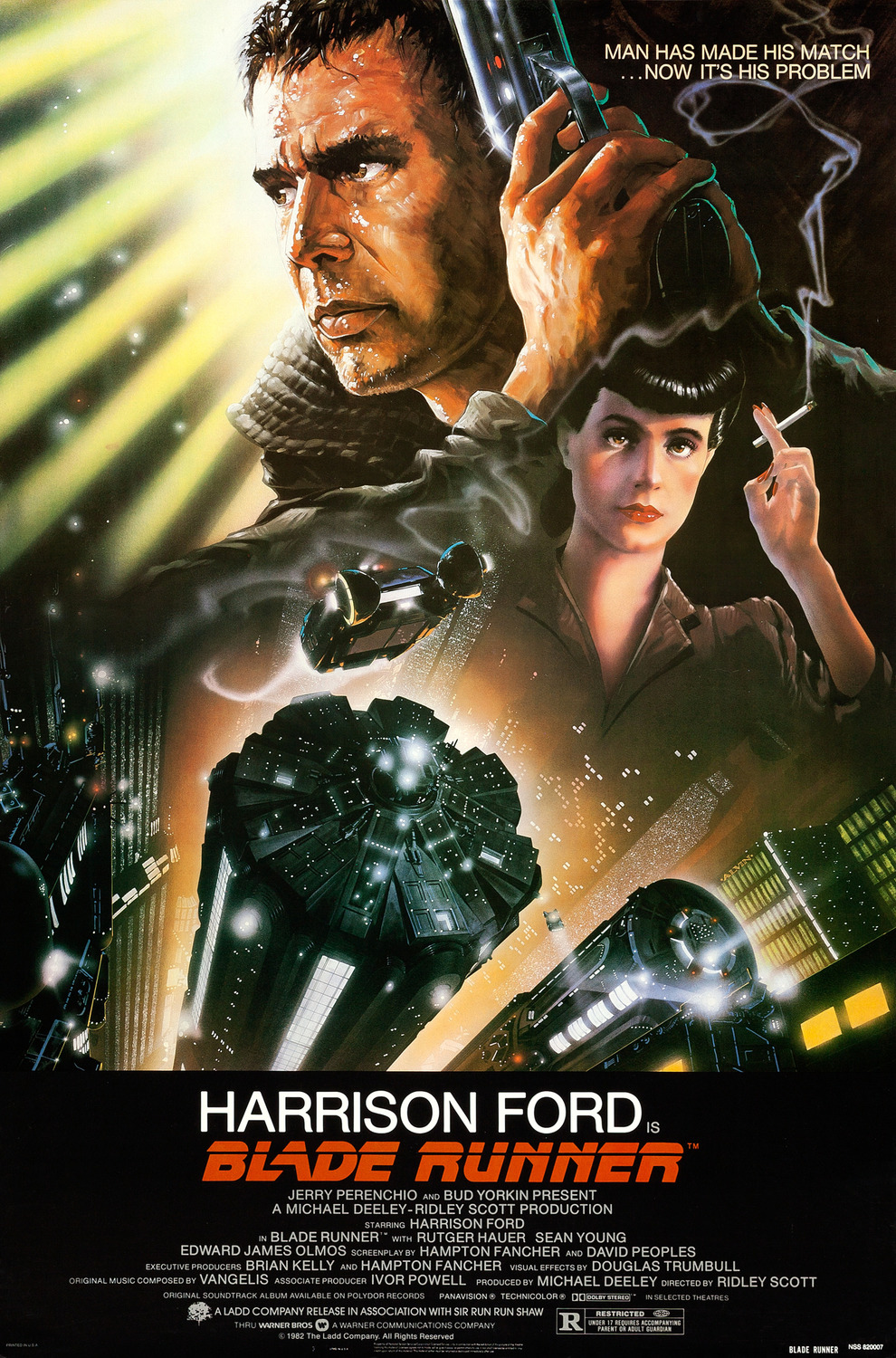 You know, I'm starting to think this Harrison Ford guy might be popular.

Oh, who am I kidding. This is one of, if not my favourite film of all time. I can't really describe it. Ridley Scott (him again, he was very good at this directing thing you know, especially in the 80's) did a fantastic job with the film. The neo-noir styling is perfect, the visuals are fantastic, even in their grimiest, and the soundtrack is wonderful. And then we have the actors. Harrison Ford is, well, I dunno. He's more charming and fun in Star Wars and Indiana Jones, but I like this film more because he's not being Han Solo. His performance has so much more depth in this film. And Rutger Hauer? Oh Rutger Hauer. I can't actually put into words how great Roy Batty is. He is a wonderfully charming sympathetic villain, his interactions with Sebastien are fantastic, and a magnificent monster, crushing the skull of Tyrell with his bare hands. He also gets the best moments in the film, chasing down Deckard through the apartment complex at the end and delivering the best bit of dialogue in the film (and this film has some amazing dialogue) with his "lost, like tears in the rain" speech, which still gives me chills.

Sorry, I might have started gushing about this film. If I'd had my way it would have been number 1, but unfortunately there's the little matter of a certain pop culture juggernaut to attend to. Yep, it's the film where Luke Skywalker gets shoved inside a furry dinosaur, snogs his sister, gets shown up by a frog version of Mr Miyagi and then gets his hand cut off by his Dad.

But, being serious, nobody should be surprised that this film won. It had a twenty point lead within the first day and is routinely a feature in the top 3 of any "Greatest Films Of All Time" list. You can argue that it isn't proper sci-fi, but those complaints are going to fall of deaf ears most of the time. So, what to say. Well, it contains the best reveal of all time, the best battle on a ice planet of all time, focuses heavily on the character that we found out last week is the best Star Wars character of all time and has the best "being frozen in carbonite" scene of all time. It also introduces some of the most popular characters in the franchise to the audience, such as our aforementioned green sensei, the token black dude and that guy in the green Stormtrooper armour that just stands around looking badass. Oh and an old lady with chimpanzee eyes shows up if you watch the original in-edited version (George Lucas, stop editing Star Wars. Now. No I'm being serious, stop it. If you even so much as look at that computer editing software again you're going on the naughty step). So, yeah, I guess that you get the top spot when you use force. It certain was a force to be reckoned with on this poll. And I'm sure the result was one everyone force-aw. (Thank you, I'll be here 'til Thursday).

And anyone who puts in the comments "But JR you do know that Empire Strikes Back was release before Karate Kid don't you, so how is Yoda a frog version of Mr Miyag?" I know, it's a joke.

8 Responses to The List: Top 10 Greatest Sci-Fi Films Of All Time