So, as the gritty reboot of our childhoods continue, we have now gotten our first trailer for the upcoming Power Rangers movie. And…. here it is:

So, there it is. I’m going to come out and be honest about it: I’m not sure this trailer is selling me. I know that this is only the first trailer and even that you can’t necessarily judge a final film based on trailers alone. But, as this is the first time that we have truly seen anything from this film outside of a few promotional stills and posters, this is what I have to work with right now. So with that said, here’s what I got out of it. (Possible spoilers if you really don’t want to know anything about this movie before you see it)

First off, the story details that the trailer gives us (or wants us to assume at this point). I finished watching it and all I could think of was: so this is The Breakfast Club becomes the X-Men by way of Transformers/Pacific Rim? Nothing, not one shot, not one image, nothing felt or said Power Rangers to me. In other reboot films, especially in the marketing, there is something that harkens back to the original, if only to cash in the nostalgia factor. Nothing here. No part of the story, of what they have given us as far as story at least, is anything remotely similar to Power Rangers as we know it. The only thing that remained the same was the names of the Rangers, which they are using the Mighty Morphin’ characters for. 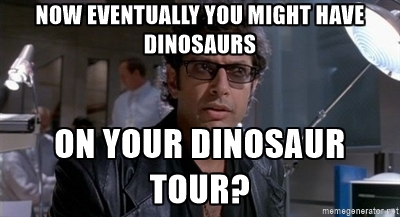 (although there should be dinosaurs, after a fashion)

Now, this remains to be seen whether any of this is a good idea or not, but for now I can presume that they are using very little from the show at all, outside of a few broad details.

I also want to talk about the look of the thing itself. Visually, much of it was lit darkly without a lot of the brightness of color that the show had. Even daylight, outside shots are blunted by clouds or shadow or just lack warmth in their light. The mid-to-end quick cut montage gives an unpleasant Michael Bay Transformers feel that I had hoped to avoid. There are no shots of zords here (not a huge surprise), and only the briefest look at the suits at the end as they appear on the Rangers. And it’s like the Venom Symbiote wanted to go for a look that was a little bit Mass Effect and a little bit Iron Man. 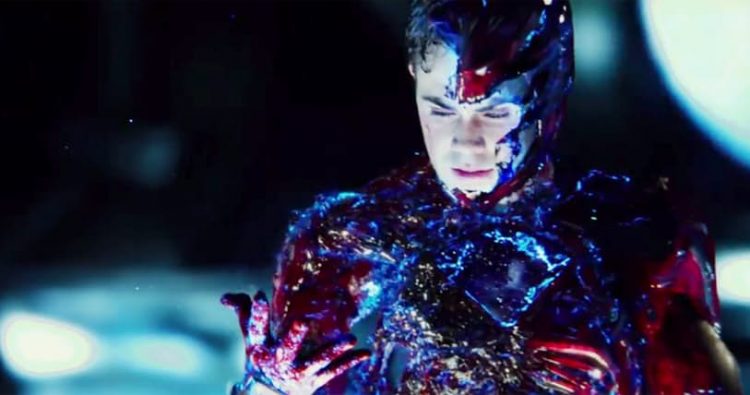 (With a splash of Carnage as well.)

Overall, it just looked so very modern. If the original Power Rangers show had a look that was very much a product of it’s time, then I think this reboot might hit that aspect right on the head. It’s almost painful how by-the-numbers, absolutely 21st century this looks, and somehow there’s a wrongness about that that I can’t quite describe.

There’s one last thing I want to touch on about this trailer. There’s hints of action and romance and serious tone as if to say ‘this ain’t your parents’ Power Rangers folks, this is the new, modern, Nolan-Batman-trilogy-esque Power Rangers!”. And that’s all well and good that the folks making this film want to make something more serious and adult than the source material. But it kind of feels like a half measure at this point. Why? Because this short film came out beforehand that introduced a truly dark, gritty, and absolutely adult version of Power Rangers. Perhaps this is my bias showing because I loved it (and also the Punisher short he did), but this film seems like it’s trying to go in that direction but not able to fully commit. So it went over lukewarm for me. It was also seemed to take itself way too seriously. I get trying to limit the campiness of the source material, but just a touch of humor, of self-awareness would have benefitted it greatly. Otherwise we’re going to end up with some cringe-worthy melodrama on our hands in a series that always had at least some aspect of fun about it. So just… lighten up a little, guys. I really hope I’m just reading too much into this first trailer, that I’m taking way more out of this two-and-a-half minutes than is actually there. But Power Rangers, especially Mighty Morphin’, holds a place in my heart, and I just want to see this movie be good. Not just for the seven-year-old me either, but for my seven-year-old that watches not only the old episodes I watched, but the newer ones too.

So what did you guys think of the trailers? Good, bad, meh? Do you think this movie is going to pan out, or just end up another forgettable reboot? As always, let me know down in the comments!

This entry was posted in Movies and TV and tagged geek, movies, reviews. Bookmark the permalink.