Aliens, they're everywhere. We might not be any closer to discovering extra-terrestrial life in real life, but in mass media the invasion has already happened. In film you have all manner of blobs, little brown things with glowy fingers and long necks, cockroaches that love sugary water, horrifying monsters with elongated heads and a preference for exploding out of peoples chests and, of course, walking carpets. TV has numerous examples as well, whether it be men in blue boxes that are bigger on the inside, war-loving guys with creases running down the middle of their faces and pseudo-roman centurions that try to kill rabbits with ray guns. And of course comics are no different. Throughout the around 90 years of comic book publication, there have been many examples of aliens in comics, and in todays list I'm going to rank what I believe to be the top 10.

Now, this list will only include aliens from the comics medium, so no beings from other dimensions or parallel worlds (so no Anti-Monitor, Annihilus, Howard The Duck or Mr Mxyzptlk), any beings which are considered aliens in cannons outside of the comics (so no Asgardians here) and no characters that originated in other medium but have appeared in comics (so no Star Wars, Star Trek or Doctor Who characters here, at least none that really matter because there have been numerous minor characters from those series that have debuted in the comics but never mattered in the grand scheme of things). I'm also not including entire races, so you won't see the Oan's, the Kree or the Skrulls on this list, despite their impact on comics (although individuals that belong to these races may appear). And I'm also not going to include more than one member of any particular race, because then you have half the list taken up by one alien race and the other half divided between another 2-3 which is a bit boring. Oh and no symbiotes. Venom and Carnage are great and yes the suits are alien, but there's still a human in there, so it doesn't count.

Anyway, long enough intro I think. On with the show.

Warning: Opinions ahead. If you don't like it, well, things could be worse, you could be getting attacked by a face-hugger or something.

And we kick things off with a classic Fantastic Four villain (expect to see a few more on this list). A Skrull, whose race have the classic green skin bug-eyed look you'd expect from 50's-60's aliens, as well as a shape-shifting ability that just screams Cold War alien movie thinly veiled Communist infiltration paranoia, as far as classic aliens go, it ticks all the boxes. Augmented with the powers of the Fantastic Four, Kl'rt (winning on the alien name front as well) has been around and trying to pave the way for a Skrull invasion of Earth since 1963, yet he has also played some-what of a hero, aiding Hulkling, joining alliances to fight Annihilus, Ultron and Thanos. However, it is his villainy that lands him on this list.

In terms of the DC universe canon, Krona is the most important character in the universe, being the one who let evil into the universe, split the cosmos into a multiverse (leading to the creation of both the Monitor and the Anti-Monitor) and caused the Oans to take up the mantle of Guardians of the Universe, due to his attempts to see the origins of creation. So in that sense, he's a pretty important guy. He's also one of the few characters to have ever actively transcended the publishing multiversal barrier and invaded the Marvel Universe, challenging the Grandmaster to a cosmic game in order to discover the origins of creation (which he is wont to do). Fellow Oan Ganthet was also in consideration for this list, being the first Guardian of the Universe to take a name and being vital during the War of Light storyline, however Krona just edges him out due to his wider importance to what little is left of DC's continuity (new 52 joke).

Oh look, another Green Lantern character. Who'd a thunk that a series about an intergalactic police force would have great alien characters? Killowog could also have taken this spot but, as great as the Lantern drill sergant is, I had to give this spot to Sinestro because he is the Green Lantern corps former greatest member and now their greatest enemy. He's been around since 1961 and in that time he's been everything from wise mentor figure, haughty commander, ruthless dictator, sadistic killer, maniacal genius, glory hunting egomaniac and willing hero. He's been as important to the Green Lantern mythos as Magneto is to the X-Men or Lex Luthor is to Superman and that gets him on this list.

A mad alien tyrant who attempts to wipe out all of creation. It's not the most original idea (nor will it be the last time the idea appears on this list), but it is one that Marvel are very good at putting to use. Generally speaking, any character who requires all the heroes you can possibly get to band together in order to defeat them, you know that character is a big deal. One of the ultimate threats in the Marvel universe, Thanos is capable (and often willing) to annihilate planets when he feels the need. And, I know this is about the comics, but Marvel have certainly done a fantastic job of elevating Thanos during his cameos in the MCU and making him feel like the be-all and end-all of their entire universe.

An alien android whose hobbies include shrinking and collecting cities from various inhabited planets so he can create a world for himself to rule. I guess it beats X-Box if you're bored. A guy who is one of the few foes equal to Superman and is often considered to be one of, if not the smartest characters in the DC universe. Having been around for nearly 60 years, Brainiac has been through numerous incarnations and had numerous origin stories (as DC characters are wont to do, New 52 joke) but he's still always a major threat to Superman and a nightmare for town planners everywhere. Oh and a future version of him joined the Legion of Super-Heroes. 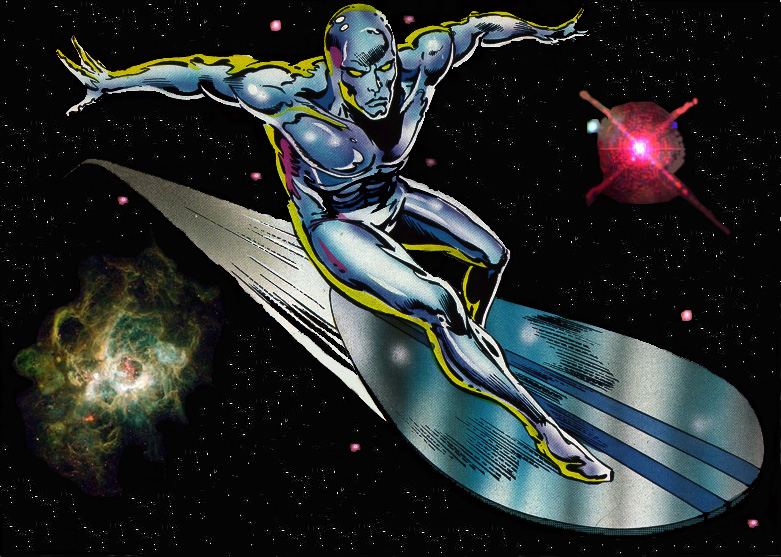 Why was Jack Kirby so good at creating awesome alien characters? At one time one of Marvel's most popular characters and still probably their most famous alien hero (considering the Kree Captain Marvel has been dead for quite a while now), Silver Surfer is one of the more interesting characters not to have had a consistent, long running comic. He originally was an alien scientist who made a deal with a cosmic entity to save his planet, becoming the herald for said entity before turning on his master to save another planet. He's since been a hero, faced villains and evil alien race, fought the Hulk numerous times, gone back to being a herald and had a few run ins with other heroes (usually Thor). But lets be honest, the best thing about the Surfer is how cool he looks. Lets just not mention the movie ok.

Another Jack Kirby character, Darkseid is one of the most powerful characters on this list. When you're considered the most powerful being of your race and you race is known as the "New Gods", you mean some serious business. Like Jack Kirby's later creation (and basically Marvel version) Thanos, Darkseid is a mad tyrant aiming for universal domination. Unlike Thanos however, Darkseid is basically The Big Bad of DC, there's no-one that anyone can say is above him. Krona? Nope. Anti-Monitor? Not really. Lex Luthor or The Joker? Not even close. Darkseid is so powerful, even his goons are considered big enough threats to be the main enemy in the upcoming Justice League film. God only knows what sort of stops they're going to pull out when Darkseid makes his appearance (knowing Warner Bros. major destruction and city levelling and an even more mopey Superman, DCEU joke).

Yet another green shapeshifting alien dude, but this time of the heroic variety. A founder member of the Justice League of America and that's pretty much all the reasoning you need to have him included on this list. He's also been in nearly every iteration of the team, except for a short time in the 70's when he took a break and more recently when the New 52 rebooted continuity (again). A fascinating character, a brilliant variation on the "last of their kind" trope and the only guy who could make wearing nothing but a pair of trunks and a cape look cool, why DC side-line him so often is beyond me.

What is there to say about Galactus. The owner of the finest hat in all of comics, the guy has quite an appetite and a penchant for making people all silver. He also managed to survive the destruction of a universe and the creation of a new one, which is always nice to put on the CV. He's the guy you go to if you need something done, provided that something is complete and utter destruction and consumption of your nearest inhabited planet. He's also a bit strong, you know, to the level it takes an Annihilus/ Thanos team up for him to be close to death. But again, we'd best not mention the movie.

Again, I'm being captain obvious, but come on? He's been around for nearly 80 years and has been in publication for that entire time. The only other character who can claim that accolade is Batman. Wonder Woman can't, Captain America can't and nor can any of the members of the Justice Society. When you're a character who is quite literally synonymous with the medium, you're damn well going at the top of any list. His legacy may have been muddied somewhat in recent times, due to changing public perceptions of what a superhero should be and some questionable choices in both the comics and the films, but Superman is still one of the cornerstones of the industry and will probably continue to be so until long after we're all gone.

So, that's my list. Are there any aliens you feel should have been on this list? If so, let me know, in the comments below. But now I must go.