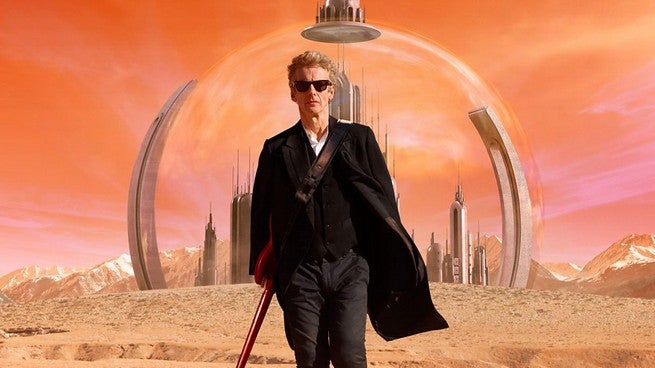 Series finale time. So, how was it?

Let me start off by saying THANK GOD HE HAS THE SONIC SCREWDRIVER BACK!!!!

And with that out of the way, the episode. And, to be honest, I can't say this episode was anything particularly special. I think the problem was that much of the emotional impact of the main companion leaving had been taken away, having actually happened 2 episodes prior, so it lost out on that front. Then last episode set up this huge climactic battle between The Doctor and the Time Lords, but that didn't happen either. It probably didn't help either that the Doctor doesn't speak for pretty much the first 10 minutes of the episode. The conflict with the high council is resolved by group desertion, so classic Doctor non-violence even though he basically did nothing but stand there in the scene, no rousing speech or anything, the soldiers just decided that they preferred the Doctor over Rassilon (who we now find out what happened to him and boy has Timothy Dalton let himself go… ;p ), so the confrontation was a bit of a damp squib.

Then the rest of the episode happens. And that's really just it. It happens. The Doctor kills someone out of the blue, which is completely out of character. They break into one of the coolest sounding parts of Gallifrey in The Vault (what with all the lore they spout about it in this episode) which is apparently really dangerous, judging by all the captured enemies in there, but nothing really happens. I think they went in there to get something, but I can't for the life of me remember them actually getting it. And then when they find the escape route, there turn out to have been an elevator right next to it, begging the question, did they just do a massive loop or did they come down a different elevator. Maybe it would have been something more if the Sliders actually did something other than slide.  Then the rest of the episode is just talking really, at which point I did actually get a bit bored (sorry). And how did the Sisterhood of Karn and Ashildr get onto Gallifrey anyway? The Doctor had to be kidnapped and escape his prison to get there and he has a TARDIS.

I dunno, I just think this was a fairly underwhelming end to the season and not really a fitting end to Clara's time as companion. Honestly, I think this episode would have been better if the Doctor had failed to "save" Clara or she had just been left dead, because it actually ended up losing impact because of (and lessening the impact of) Face The Raven.

I mean, ok, I liked the throwbacks, the dinner, the o.g TARDIS set and "Run you clever boy" and the sets and atmosphere and the technical side of things were really top notch, plus the Doctor facing down a gun-ship and just drawing a line in the sand was pretty damn badass, but I just couldn't get into the episode as a whole. I dunno. If you guys liked it, could you let me know why (not just "because it was great" or "because it's Doctor Who", did you think Peter Capaldi was really good in it? Did you like the plot? Stuff like that).

Anyway, with that I'm going to leave it here. I may or may not be back for the Christmas Episode with a JReveiws, it just depends on if I have anything that I want to say on it. I will say now, I'm happy they're bringing River Song back and I look forward to seeing her interactions with this Doctor, but I don't know if I will review the episode.