Character Of The Week: 21st September

Earlier this week, Delirious Al posted three pieces that I think might just be the best stuff this incredibly talented creator has ever done. I could have featured any of them in this blog, and in fact I changed my mind on which one to cover several times, but I eventually settled on this one because it just seems to have wonder spilling out of it (literally). 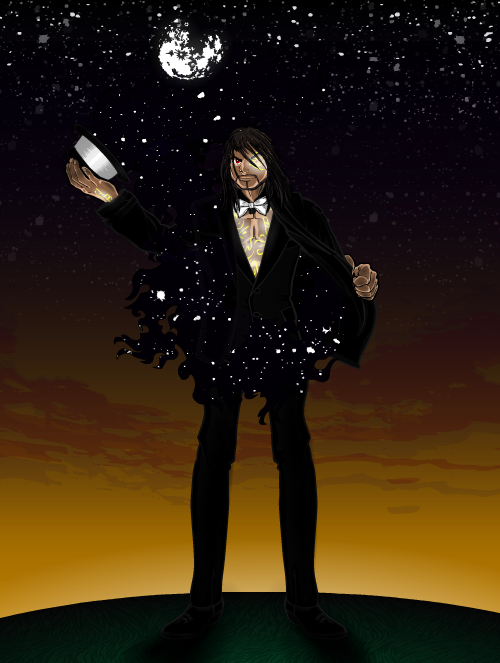 I'm struggling to know where to start. The glowing effect on the symbols/ tattoos across what of the characters body you can see is just stunning, the simplicity of having the white glow behind the yellow font in order to enhance the font and make it stand out in such a way that it seems realistic is brilliant. Then we have the characters expression and his pose, which are just the right mixture of malevolence, mystery and charisma to make him an enticing centrepiece to a piece with so many different eye catches.

But really, the reason this piece won out over the other two is the background. And to discuss that we must start with the costume, because the two are basically inseparable. For once I find myself unable to recognise what item was used to create the effect of the stars spilling out of the coat, but the effect is magnificent. It does look like a condensed gas escaping from a container. The fact that the rest of the costume is also black adds to the effect, because it is hard to tell where the character ends and the background begins. And then there's the sunrise, which just adds another layer of warmth and I might just have run out of superlatives for which I apologise, but I think you get the idea.

9 Responses to Character Of The Week: 21st September