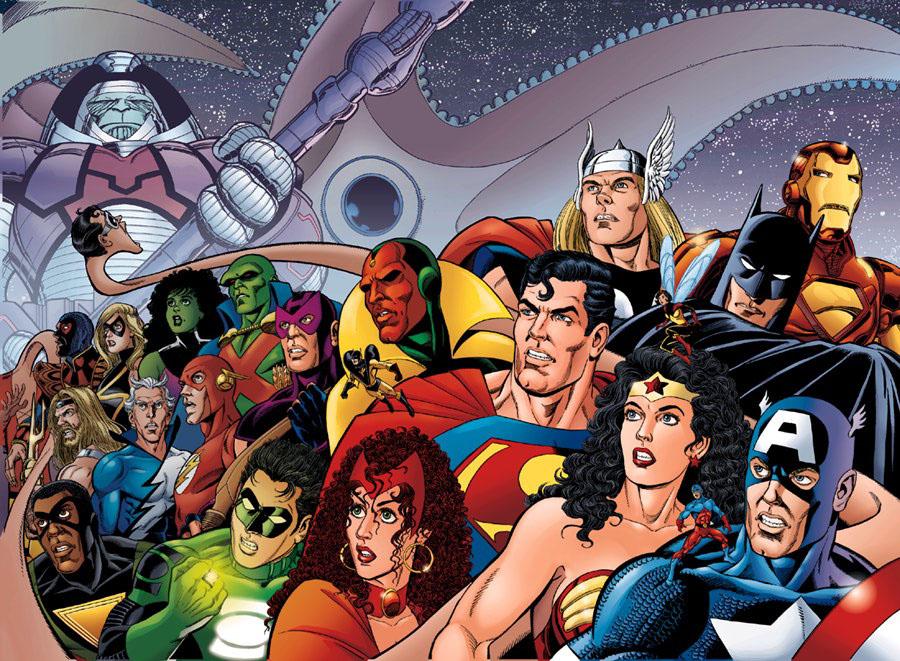 This weeks big question is, are crossovers a good idea?

Rather than give my opinion (I'm going to leave that up to you guys), I thought I'd just do a small (-ish, ok not that small) history lesson of the comic book crossover. If you just want to give an opinion and don't want to read my ramblings on comic book history, I suggest going straight to the comments, because there's rather a lot after the jump.

The crossover really started out as team ups between heroes from different comics. Marvel got there first, with Namor and the original Human Torch battling in Marvel Mystery Comics ♯8 of June 1940, a few months before DC teamed up its greatest heroes that weren't Superman or Batman in the Justice Society Of America. Soon you had a lot of teams popping up, Seven Soldiers Of Victory, All Winners Squad, Young Allies (Marvels Teen Titans two decades before the Teen Titans were formed), but of course none of these were what we would now call 'crossovers' like MMC♯8. For that we'd have to wait until 1954, when DC finally let Superman and Batman meet in Worlds Finest Comics.

After Worlds Finest, there was again a lull in crossovers, until the Justice League debuted in 1960 teams had been in short supply as well. Although the Brave And The Bold made it to the news stands in the late 50's, it was originally a showcase title rather than a team-up title. Characters would sometimes find their way into titles not their own (Hulk was especially good at this), but the first major crossover was what later became known as 'The First Crisis' a crossover between DC's Earth-1 Justice League and Earth-2 Justice Society in 1963. Soon after was a mini-crossover craze, The Avengers and Teen Titans formed, Green Lantern teamed up with Flash against Major Disaster, Captain America teamed up with Nick Fury in a crossover between their two WW2 series and the first of the Superman vs. Flash races took place. However it was soon over.

It wasn't until the 70's that the big two (and I am being a bit narrow on this subject because I know much more about DC & Marvel than I do about Dark Horse or Image) really twigged that teaming up their heroes could equal sales. '69 saw the first team-up in The Brave And The Bold (Batman and Green Arrow), which would soon become a dedicated team-up book, and soon after Jack Kirby launched the first 'epic' story that would crossover into multiple titles with his Fourth World saga, which introduced Mister Miracle, Orion and the other New Gods and, most importantly, Darkseid. Soon there was a crossover between the JLA, JSA and the Seven Soldiers OF Victory, JLA/ JSA crossovers happened with some frequency at this point. Marvel got in on the act too, with it's Kree-Skrull war storyline and the debut of the Defenders team (Doctor Strange, Hulk and Namor principally, all of whom had teamed up previously). They then launched Marvel Two-In-One, a team-up comic that saw The Thing from the Fantastic Four team up with various other heroes each month. Spider-Man got in on the act later, first facing Dracula from Marvels Giant Sized Horrors book then getting his own team up book in Marvel Team-Up.

1975 saw the biggest crossover so far, and it didn't even feature any superheroes, instead featuring a girl in ruby shoes, a scarecrow, a tin man, a cowardly lion and a dog called Toto. Marvel and DC collaborating on a comic book adaptation of The Wizard Of Oz layed the ground-work for the momentous things that would come in the next few years. The first of which saw Superman and Spider-Man team up to stop Lex Luthor and Doctor Octopus taking control of the worlds weather.

Crossovers saw a brief surge in popularity in the late 70's. Super Friends found its way onto both the screen and page, Superman faced off against Muhammad Ali, Showcase celebrated its 100th issue by teaming up all of the heroes who debuted in its pages (Barry Allen's Flash, Hal Jordan's Green Lantern, Atom, Challengers Of the Unknown to name just a few), Superman and The Flash teamed up to prevent galactic war and there was yet another JLA/ JSA crossover. Meanwhile, at Marvel, the Korvac saga killed every single member of the Avengers (if only for a short while), Iron Man fought Namor and both The Thing and Spider-Man's team-up comics increased in popularity and strangeness of crossovers (Spider-Man and Red Sonja anyone?)

However, it was the 80's that really saw the crossover comic become and 'event'. DC and Marvel crossed-over again, with Superman and Spider-man meeting again, Batman taking on The Hulk and the Teen Titans teaming up with the X-Men. Event comics also made a splash with 'The Dark Phoenix Saga', 'Days Of Future Past' and the Legion of Super Heroes 'Great Darkness Saga' all happening within 2 years. However, the biggest was yet too come.

In 1984, Marvel where approached by toy company Mattel, who asked Marvel to come up with a premise for why all of the Marvel heroes that Mattel where producing toys of would be gathered in one place. The result was 'Secret Wars', really the first company wide crossover. It included the Avengers, X-Men, Fantastic Four and Spider-Man (along with their respective rogues galleries) and had an impact on the future of the Marvel universe (not just because it introduced Spidey's black costume, later to become Venom). One year later, DC upped the ante with 'Crisis On Infinite Earths' which not only crossed over through all of DC's many alternate realities, but it destroyed all of them and rebooted the entire DC universe (and you thought the New 52 was a new idea). Both of these led to further crossovers, Marvel doing 'Secret Wars II' as a direct follow up a year later. DC however, pretty much had a crossover a year after 1985, 'Legends' followed in 1986 (featuring DC's heroes teaming up to battle against Darkseid. Sounds familiar doesn't it), with 'Millennium', 'Cosmic Odyssey' and 'Invasion' all in 1988. Marvel seemed content to just crossover between similar titles, such as the X-men crossover 'Mutant Massacre' in '86 or the 'Fearful Symmetry' arc that ran though all of Spider-Man's titles in  '87. Their only real company scale cross-overs where on a much smaller scale of story telling ('The Fall Of Mutants' dealt with a Mutant Registration Act and its implications, whilst 'Acts Of Vengeance' was just a reason to have heroes fighting villains they wouldn't fight usually).

Of course, by the 90's everything had to be bigger than before. It all started small, a second Superman vs. Flash race, another Worlds Finest and an X-Men titles only crossover. However, in '91 Marvel unleashed 'The Infinty Gauntlet'  and DC gave us 'Armageddon 2001', showing a sign of what was to come. And sure enough, 2 years later saw 'The Death Of Superman', 'Knightfall', and 'Maximum Carnage' (a Spider-Man crossover based around Carnage and featuring Captain America, Iron Fist and Deathlok amongst others). 1994 gave us 'Emerald Twilight' (Hal Jordan's very own Knightfall), 'Hour Of Reckoning' (A follow up to 'Emerald Twilight'), 'Spawn/ Batman', 'Marvels' (A history of the Marvel universe told through the eyes of a struggling photojournalist) and the start of Spider-Man's convoluted and over-complicated 'Clone Saga'.

Of course, by 1995, the big two were on a role, so we saw Wonder Woman lose her title and then regain it when her replacement was killed. Green Arrow was killed and DC's villains where taken to hell and offered a power upgrade in exchange for their souls. Meanwhile, over at Marvel, 'The Clone Saga' rumbled on, 'Marvels' got a follow up in 'Ruins' and X-Men found themselves in an 'Age Of Apocalypse'. After that there was only one way to go and 1996 saw Marvel vs. DC and the birth of Amalgam comics. DC had their own go at a 'Marvels' style comic with 'Kingdom Come' and the Marvel universe met Onslaught, a being who would later that year kill half of the Marvel universe and mean Rob Liefeld could get his hands on the Avengers and Captain America. We also saw the death of Hal Jordan in 'Final Night' and the end to 'The Clone Saga'. 1997, Marvel brought back all of their heroes into normal continuity with 'Heroes Reborn: The Return', DC killed Wonder Woman, investigated the 'Genesis' of the New Gods and went off on a 'Tangent'.

DC kept up with the crossovers through out the last few years of the 90's and into the early 00's, investigating what the Justice League would have been like without Superman in 'The Nail', celebrating their Millionth comic, having a war between the JLA and the Teen Titans and doing a follow up to 'Kingdom Come'. At the start of the new millennia, they reintroduced their parallel earths in 'JLA: Earth 2', had Earth stolen in 'JLA: Heavens Ladder' and brought both Hal Jordan and Oliver Quinn back to life. Marvel, however, seemed less bothered by crossovers, their next one coming in 2003 ('1602'). The final Marvel/ DC crossover from the 80's, 'JLA/ Avengers, had a very long overdue release in September of that year and DC did yet another 'Worlds Finest'.

2004 was really the ground zero for the modern crossover event, with 'Identity Crisis', 'Green Lantern: Rebirth', Nick Fury's 'Secret War' and 'Avengers Disassembled' all taking place that year. The following year saw 'House Of M', 'Spider-Man: The Other' and 'Infinite Crisis' before 2006 really let lose with the crossovers, especially in the Marvel universe. 2006 was the year of 'X-Men: Deadly Genisis', 'Annihilation', ' Illuminati' and 'Civil War'. This carried on into 2007, with 'The Initiative' being launched, the death of Captain America, 'World War Hulk' being declared and Spider-Man asking for 'One More Day'. Of course, DC were also at it, with 'The 52' ongoing through out 2006/2007 and culminating in 'World War III', The Brave And The Bold was relaunched, the amazons invaded America, there was the 'Sinestro Corps War' and the 'Fall Of The Fourth World'. By 2008, you'd have thought they'd have run out of ideas, but no. We had 'Secret Invasion' and 'Final Crisis', 2009 'Dark Reign', 'Batman: Battle For The Cowl', 'Flash: Rebirth' and 'Blackest Night' before of course, everything rounds off between 2010 and 2012 with (deep breath) 'Seige', 'Fear Itself', 'Avengers vs. X-Men', 'Avengers vs. Punisher', 'Brightest Day', 'Batman: Return Of Bruce Wayne' and 'Flashpoint'.

Phew, I wondered if I'd ever finish that. Ok, over to you guys. Next's week's Big Question will be a follow up to this, with hopefully a much shorter post.

5 Responses to The Big Question ♯5