Having a big gun is great if you're a comics fan because big guns are cool. But guns can be taken away, which is not cool, because then how can you shoot things? Luckily a grateful comics nation long ago arrived at a solution for this conundrum -- make a gun out of yourself! The glorious breakthrough is exemplified in this Guy "Extreme Nineties Spokeslantern" Gardner cover: 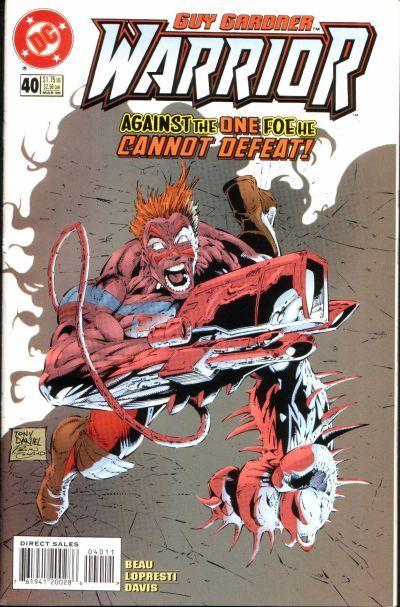 This isn't really a "costume" per se, but it's definitely "bad" and he's a "super" if not necessarily a "hero". And "scare" quotes are "scary" and "irritating".

But aside from the obsession with guns so intense it causes you to actually become a gun, and ignoring the spikes (EXTREME!!) and Unhinged Giant Snake Jaw (©Image Comics), what really bugs me about all of these integrated biological firearms (get it, fireARMS?) is, what do they shoot, exactly?

I'll pause while you think about this.

The only stuff it can fire is stuff that the body itself creates. So at the end of an extended firefight this guy ought to be a withered husk lying smoking on the ground. Granted, there is precedence for humans creating excess material but most of it is disgusting. Which is a nice way of saying that if Guy Gardner comes after me with his giant gun arm shooting snot bullets at me, he wins on gross-out points alone. But I'd sure kick his ass first, because that's just wrong.