Nazgûl vs. Dementors. Who wins? 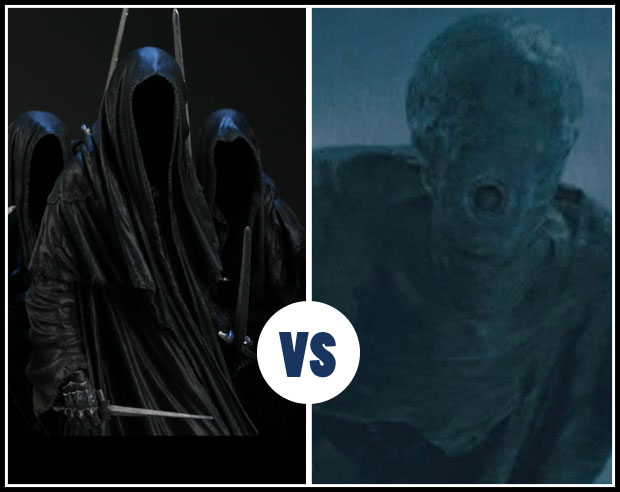 Two cowled, other-worldly menaces from the biggest movie (and book) franchises in modern history face off in this week's "Versus". Each have one foot in the material plane and the other firmly planted in something closely resembling Hell. Both give our heroes a run for their money and serve a master of evil. At some point, they've all been mistaken for curtains. So who would win in a fight?

A dementor's main power is to suck the soul from its target, which raises the first question of whether or not Nazgûl even have souls. From the reading I've done, I think they do -- they're still mortals, just with their lives stretched far beyond that of normal men by the power of the Ring. There is something for the dementors to eat, therefore.

The Nazgûl have some powerful magic of their own, of course, including their own rings of power. Would those have any effect on dementors?

I don't know, that's why I am asking you! Sound off in the comments about which of these evil henchmen would defeat the other in an all-out battle.

19 Responses to Nazgûl vs. Dementors. Who wins?