With it being Independence Day in the US (celebrating the anniversary of the ratification of the Declaration of Independence, rebelling against the authority of Great Britain), I thought I'd take a look at one of the worst "patriotic" super-hero outfits for Bad Costume Wednesday.

You can see an amazing collection of such characters at Comic Book Resources, but I've settled on Captain Glory by Jack Kirby: 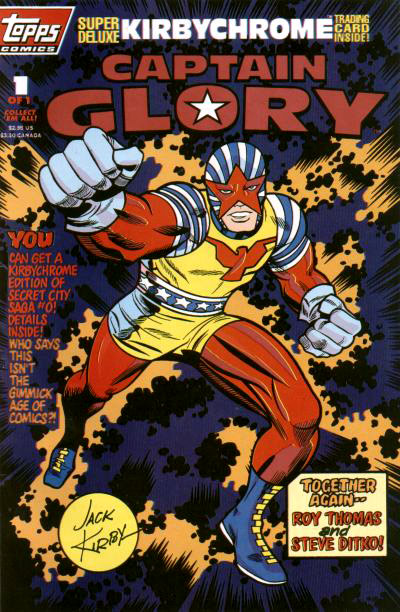 On one hand, this is a fairly typical sort of Golden Age character, with the wrestling shorts and a tank top. On the other hand, it's a yellow tank top with a striped short-sleeved shirt underneath and a built-in hoodie mask. Also striped. While his face is getting Alien-humped by a giant star. I don't know how you expect anyone to fight crime and/or commies while getting orally invaded by Starro's half-breed offspring.

Also, and I admit I'll have to double-check my flag to be sure, but I'm pretty confident the ol' Stars and Bars doesn't have yellow in it. And that the aforementioned stripes are red, not blue. But it's the yellow that really throws me -- if it were used just as a spot color here and there, fine, but it's the biggest single thing he's wearing. It makes me think he's not supposed to be a national representative sort of fellow, but rather a poorly dressed wrestling fan.

Happy Fourth of July to all our US readers!