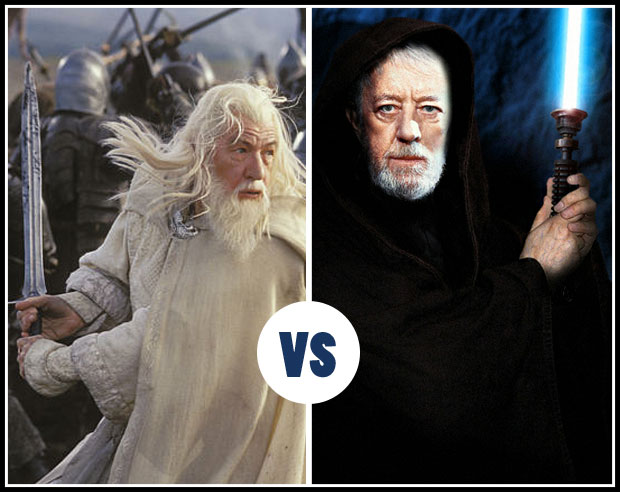 Do you prefer your wizards old-fashioned, with Elven swords and magic wands, or futuristic with glowing light sabers and Jedi mind tricks? Either way, you're guaranteed a kindly if somewhat gruff old man in robes, so you can't go too wrong.

Both characters have shown great power coupled with great restraint in using it, but what we're talking about here is a classic hero-vs-hero fight. Every good team-up comic has it, that moment when the leads, no realizing who the other is, come to blows. They duke it out for a while before realization dawns and they go after the bad guys together. But in that slugfest, who has the upper hand? Let's break it down.

You can make the case that Obi Wan actually does more "magic" where we can see it than Gandalf does, despite the latter being the more traditional spell-slinger. From "These are not the droids you're looking for" to making his light saber fly to him, the Jedi seems to have a lot of tricks up his sleeve. Gandalf's magic seems to be the more sedate, longer-term, intrinsic-to-the-world sort. The most I can recall him doing directly is lighting up his staff. All Obi Wan has to do is turn on his lightsaber for that!

On the other hand, Gandalf took down a Balrog. And we seem him wading through hordes of orcs, rather than one inebriated drunk at a divy bar and the occasional Sand Person. Granted, the young Obi Wan is pretty darn impressive in any kind of general scrum, whether it be security droids or Darth Mauls, but this is the older, less spry version we're talking about.

I suspect this fight would hinge on whether a light saber can cut through Glamdring the magic sword. We can be pretty confident that Jedi mind tricks would be ineffective against someone as intelligent as Gandalf. We'd probably see lots of flotsam and jetsam being flung about, and some really nice swordplay, but not a lot of flashy Potter-verse style spells being exchanged.

So how about it, folks, which sort of wizard would you pick to win this fight?

25 Responses to Gandalf vs. Obi Wan