Phantom Menace vs. Batman and Robin 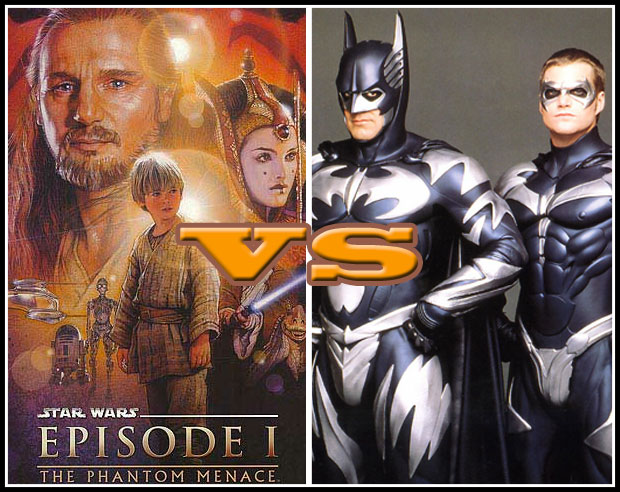 We all know that few things rival a full-on nerdgasm for sheer, frothy power, the kind of perfect storm achieved while watching Captain America and Iron Man go at it in "The Avengers" or waxing poetic about why "Lord of the Rings" is the greatest thing ever.

One of those rival feelings, however, is a full-on nerd rage. Talk about sheer frothy power! I sometimes think we like tearing things down more than we do building them up, which is a shame because it makes us like the rest of humanity. And that's a downer.

Two geek films in particular have, over the years, taken up a pre-eminent position in the pantheon of nerd anger: "The Phantom Menace" and "Batman and Robin". What I'm interested in is not so much bashing either of these movies (that's been done to death), but rather why these two in particular are such hot buttons. I mean, there are plenty of other "franchise destroying" films out there, from "Superman III" to "X-Men 3". They come in for their share of revilement, sure, but nowhere near the level of the other two.

And it's not even like either of these actually destroyed their franchises. The last time I checked, both Batman movies and Star Wars projects were doing just fine, thank you very much.

So my question for you is really two-fold. First, which of these two did the most damage to their franchise in your eyes. And second, WHY? Why do you take it personally in a way you haven't for other wretched geek movies?

Also, let me apologize in advance to frequent commenter Nick. I'm not trying to beat a dead horse here, I'm honestly curious as to what elevates a film from not being just another bad movie, but to something almost personally offensive. It's fascinating to me.

94 Responses to Phantom Menace vs. Batman and Robin