Valuable contributor ReaderKate sent in these arresting photos of the Starfire (aka "Not That One, the Other One"): 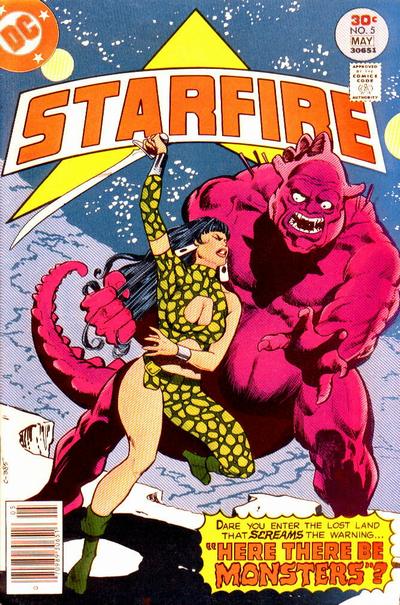 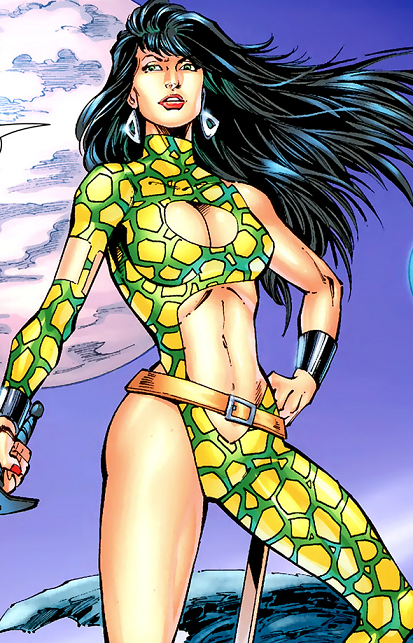 I think her commentary was spot-on, so I gleefully steal it and present it to you: "She apparently couldn't decide whether to wear camouflage or show skin, and tried to split the difference. And while she'd only have to shave one leg and one armpit while wearing this, it must have been a bitch to put on (and to draw.)".

This is why diversity is important -- it never would have occurred to me to think about having to shave only one pit and one leg. And yet now, I can't stop thinking about it. It makes me wonder if other super-heroines bother shaving their legs at all if they're in full tights. I'm pretty sure I wouldn't, though I wouldn't be caught dead in some of the outfits these unfortunate women are crammed into in the first place.

But I bet that's one reason Black Canary wears that little jacket -- it's the perfect excuse for going au naturel in the underarm arena. And she seems like the kind of practical person who would put serious thought into that.

Personal hygiene aside, Starfire ("Look, I'm The Other One, Pal!") looks like she was attacked by a hyperactive toddler with a pair of scissors and sketchy motor control. Pieces of this outfit are chopped off seemingly at random, like that rectangular window on her upper arm. What, suddenly your biceps are sweaty but only in that one spot?

The Power Girl Boob Portal has virtually become a staple of female super-costume design, of course, with the accompanying and even more nonsensical in context high collar. Seriously, who gets dressed and worries more about hiding their throat than their boobs?

I look forward to your animal-vegetable prurient speculation in the comments.