I'm all for women feeling empowered enough to wear whatever they like, but there's a thin line between "sexy powerful" and "my son ran through my closet with a pair of scissors". A line Sue Richards clearly crossed here: 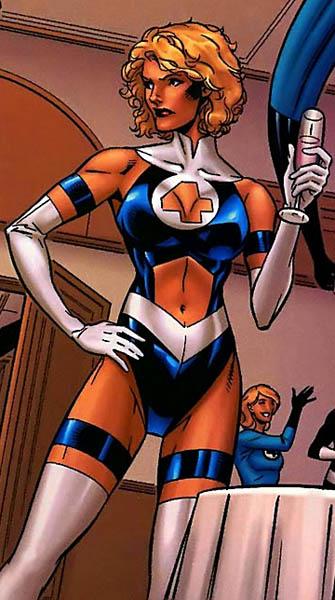 The matching chest and tummy cut-outs I understand. I mean, they look kind of stupid, but I understand that Marvel might have felt Power Girl's cleavage just left too much to the imagination and so had to one-up their rivals.

What I don't get at all, though, is the faux garter belts at both thigh and bicep. I can only assume Sue is using her powerful force field manipulation powers to hold them in place as some sort of homage to pointlessness.

Most confusing to me, however, is whatever is going on in the neck and shoulder area. You're already parading around in an outfit that that requires advanced super powers simply to stay on, yet somehow you feel the need for a high Victorian collar? And while your tummy and the area between your thigh and your naughty bits is perfectly all right to flash around, it's your shoulders that need covering up? Seriously?

Not to mention I also see no way that oval stays attached when its only connections to the rest of the outfit are the spandex suspender strap coming off her sports-bra-by-way-of-Victoria's-Secret.

Seriously, if she ever gets knocked unconscious wearing that thing and the force fields turn off, we're all in for a lot more visibility from her than we bargained for.

18 Responses to The Invisible Costume