The Apocalypse Killed the Radio Star

When last we left our intrepid Freeway Warrior, we were deciding whether or not to investigate the source of a radio signal. Ever adventurous, we decided to go for it: 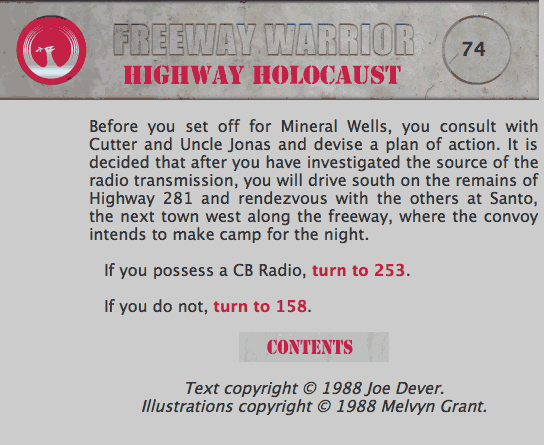 Sadly, we do not possess a CB Radio, much to my chagrin. I think every post-Apocalypse story ought to feature these handy devices, along with a gimmee-cap with a Confederate flag on it. Imagine how much more fun "Road Warrior" would have been if Mel Gibson had to come up with a CB Handle. "Breaker breaker one nine, this is the Angry Beaver, come on." 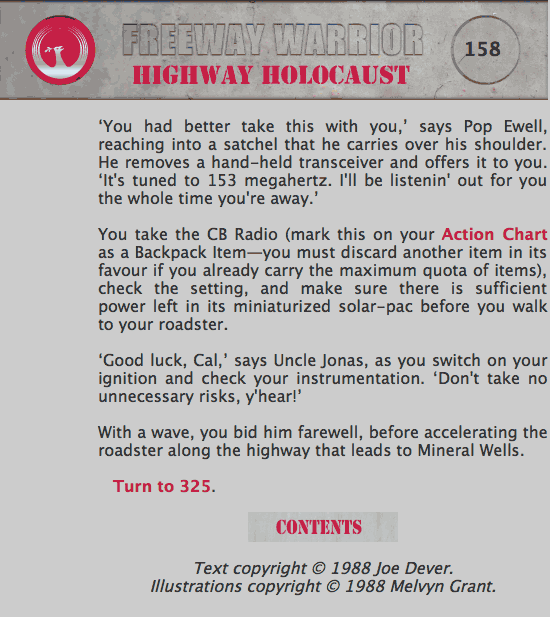 Well crap on a stick, Pop, that sure as heck would've been handy a time or two in this little misadventure before, wouldn't it? What else does this selfish bastard have hidden in that satchel -- food, water, salt tabs, that "How not to crash your car after the Apocalypse" booklet we ordered?

You know, at this point I think the authors are clearly displaying a lack of awareness of the mind set of their typical reader which, if I may sum up, is "Loot everything, kill everything else." There should never, ever be a decision point where they are asking us "Do you want to loot this" because I am pretty sure the answer will be "YES!" in approximately 100% of the cases.

However, lest I be chided for taking control out of your hands, I dutifully offer up the choice to you, loyal readers:

14 Responses to The Apocalypse Killed the Radio Star