The very first character design contest was based on a random word I generated online, "Capstan". Imp won the affair, and thus was born a long, highly entertaining series of creative endeavors.

Today we're returning to that concept.

I've used the Random Word Generator to come up with an adjective that will guide your imagination this week. That word is: 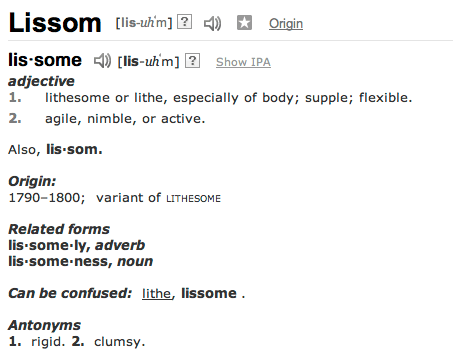 Your challenge is to create a character that embodies the concept of "lissom". You don't have to name your character that, but he/she/it should exemplify the properties of suppleness, agility, nimbleness, of being lithe of body. Published characters I would think of as "lissom" would be Mr. Fantastic; Elektra; Spider-Man; Kitty Pryde; and Uma Thurman in the "Kill Bill" series.

Characters like The Thing, The Hulk, and Blok would be the opposite of what we're talking about here. I'm looking for illustrations that ooze grace, that spill forth an agile ability beyond the normal ken, that speak to lean, lithe power.

Good luck, everyone -- now go forth and create!