"Superman IV" may be the worst super-hero movie of all time, next to "Superman III". And "Catwoman". Also, "Daredevil" ...

OK, look, "Superman IV" is a bad movie, so quit messing with my brain, Anonymous Internet Ranking Argument Person Who Only Lives In My Head! Part of the blame for that epic fail has to rest with the villain "Nuclear Man" and his wretched costume: 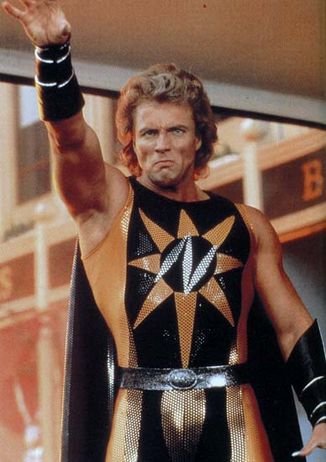 I have to -- reluctantly -- give him a pass for the hair, because it was 1987 and frankly the entire follicle world was pretty messed up. I mean, mullets were on the horizon, you know? It wasn't a pretty time. So I can forgive him for looking like Mrs. Brady after a bad day at the salon. But it doesn't help.

Not that anything could help this outfit all that much. I can't decide if my favorite bit is the crotch-enhancing gold area, surrounded by black so it really pops, or the sloppy starburst and puffy "N" on his chest. Seriously, it looks like a sixth-grade tweener spray-painted this onto her favorite stretchy top after an all-nighter of binging on "Twilight" and Twinkies. The rays aren't even, the whole thing says "puffy" instead of "radiation", and you can't even tell for sure if it's supposed to be an "N" or a lazy "Z".

However, I think the winning element in this pre-Apocalyptic disaster has to be the fingernails. I grant you, fingernails aren't generally considered to be part of the costume per se, but then again you don't see a lot of male super-villains with four-inch metallic-silver jobbies either. I believe later we discover that Lex Luthor funded the creation of his Superman-beating villain through his line of Korean nail salons.

I'm also always interested in how belts are used in these costumes. I mean, in the original Superman design, they were there to hold up his big ol' circus shorts, and you could see the loops that the belt went through in order to provide the support. But here, you've clearly got a one-piece leotard (sparkly, no less!), which doesn't need a belt, because there's no separate pants element to hold up. So why is it there? Because, that's why, and don't question your mullet-headed, puffy-lettered betters, punk!