Due to an awesome suggestion in last week's poll, this time out we're going to pit two of the smoothest, coolest, bad-boy-est captains ever to grace the spaceways with their suave selves: 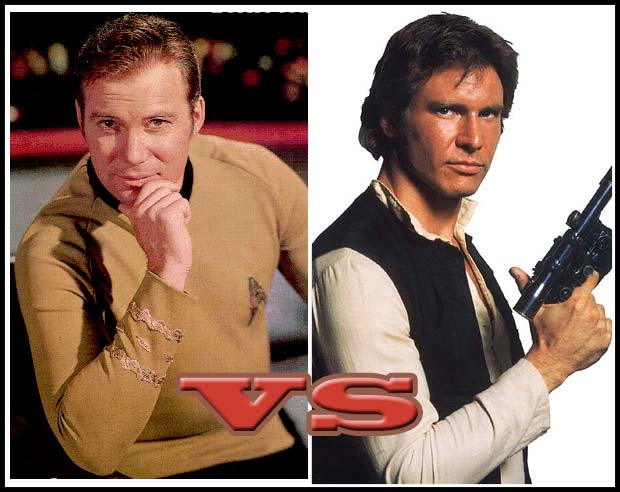 Now, to some degree how you answer depends on which universe you'd rather inhabit. You've got the Kirk-era Federation, a virtual utopia that still has enough rough edges on the frontier to make things interesting. On the other hand you've got the Empire-era Star Wars universe, complete with evil overlords and magical Force powers. One has a more sci-fi edge to it, the other ventures into science fantasy.

Let's be clear here, however -- you're serving under one of these .... um, "gentlemen" ... so you're not going to be commanding the Enterprise or being a Jedi Knight. Since we're all egoists to some degree, you're also not going to be doomed to a vanishingly short career as a Red Shirt or Storm Trooper, either. I see us fitting in somewhere between Spock/McCoy level bridge crew and Chewy-level best buddy.

Moving on from the universe, we get to the character of the two men in question. Both are hot-dog horn-dogs with a flair for the dramatic and a knack for getting things done. Han served on the shady side of the law, always one step from getting corralled by the authorities and living life on the edge. Kirk too exists on the ragged edge, though in his case he's on the lawful side of the tracks. Most of the time.

Under Kirk you have an entire system of authority, rules, and best practices, handed down for decades from the best minds of Starfleet, an entire hierarchy with experience putting large numbers of crew under the command of their god-like captains. Under Han, you're one of a tiny handful (if that) of crew, operating under nothing more than a trumped-up version of the Pirate's Code.

Their personal styles are pretty similar, though Han's got a lot more rough edges to him. He can be short-tempered and abrasive. Kirk's much smoother, though if you think there's not a hot core there, just fling the nearest green-skinned female at him.

For me, it comes down to whether you want to operate under a system, or if you'd rather be footloose and fancy free. So what about you, is it the Pirate's life for you, or a comfortable yet exciting slot in the vast machinery of Starfleet?