Speaking of Cosmic … as in, cosmically BAD

Jack "King" Kirby had a very distinctive style, one that (love it or hate it) worked for the kinds of stories he told. You can tell at a glance a character that Kirby designed, and when put into one of his worlds those characters fit, no matter how ridiculous they might look in isolation. As an example, take a look at his New God, "Orion": 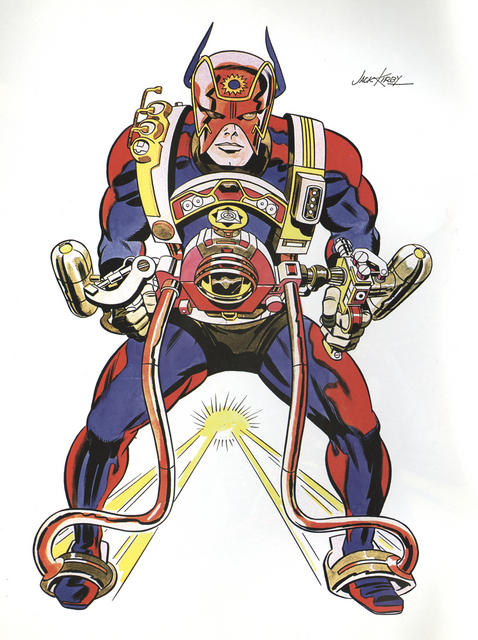 The guy's wearing magical flying slippers powered by hand-held vacuum cleaners, for pity's sake! Yes, it's a temporary transport device, but he wore it an awful lot.

Besides being literally harnessed to a massive metal contraption guaranteed to make him wobble like a Weeble and dressed in the ubiquitous circus trunks popular Back In The Day, the fact is, this guy rocks. When powered by Kirby's frenetic, kinetic, masterfully laid out pages, he almost jumps off the page and makes you believe someone in this ridiculous getup could actually be a bad-ass.

Contrast that with this Orion redesign from the Nineties: 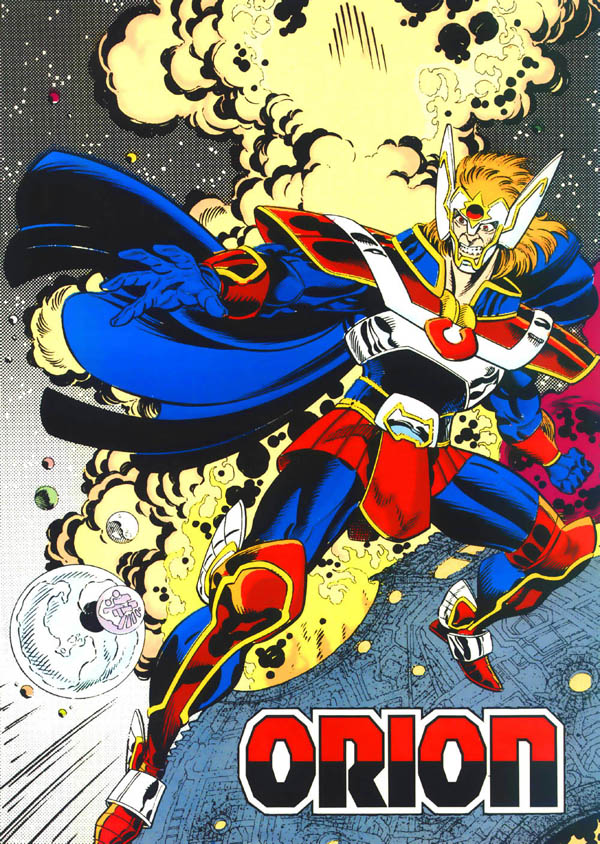 On the one hand, the ironworks are gone and he's in something that looks slightly more mainstream. On the other hand, you have pointless giant metal head fins. What is he, a 1959 Cadillac Eldorado? The ginormous shoulder pads would restrict his movement even more than the harness would have, and in return you have a somewhat jarring primary blue, red, white, and yellow cacophony all mashed together.

I'm not sure if that ... thing ... hanging down from his belt is a mud flap, a loin cloth, a massively over-engineered cup, or just compensation for the fact that he's wearing a skirt, but it looks way too phallic to be taken seriously. Especially when combined with the nonsensical boots.

I've avoided talking about that face, because technically that's not really a costume part. But let's get real, that's insane. I mean, Orion has a penchant for fury and rage in battle, that's kind of his thing, but in this case he looks less like a berserker and more like someone desperately seeking a bathroom. Which may explain the huge yellow cloud of gas emanating in the background ...

Either way, this costume redesign stinks! You don't tug on Superman's cape, you don't spit into the wind, you don't pull the mask of the ol' Lone Ranger and you don't mess around with King Kirby.

18 Responses to Speaking of Cosmic … as in, cosmically BAD