I think Caption Contest 106 was the most difficult one to date, generating the fewest entries in a long, long time and presenting major challenges. Kudos therefore to the following four folks who managed to build in a funny interim thought between the two existing ones!

I liked Loki's for the irony, Myro's for the topical reference and for anything referencing "kneel before Zod", Skybandit's because I'm about to restart my WoW account here in a few days, Mr.MikeK's prescient analysis of male-female relationships, and spidercow2010's excellent referral to one of the great Super Dickery moments of all time.

But I have to choose just one as the ultimate winner, and for that I have to go with the one I thought was the cleverest leveraging of the two existing balloons, in a way that made me laugh. Namely, Loki! 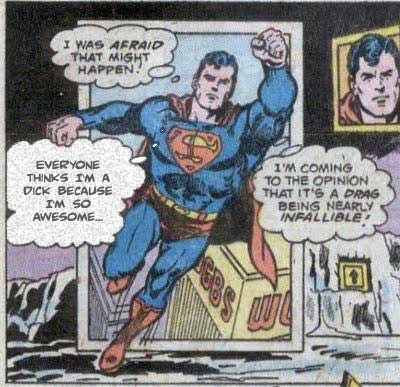 Congratulations to Loki -- just let me know what you'd like for your prize either in comments or via email, Loki, and I'll get it on the list.

Thanks to everyone who entered, and next time we'll do something that's a little more universal, promise!