In the land of bad haircuts, bad costumes are even worse

In a scene with three haircuts this bad, you know a costume has to be pretty darn epic to stand out as the worst. Luckily, Supergirl delivers: 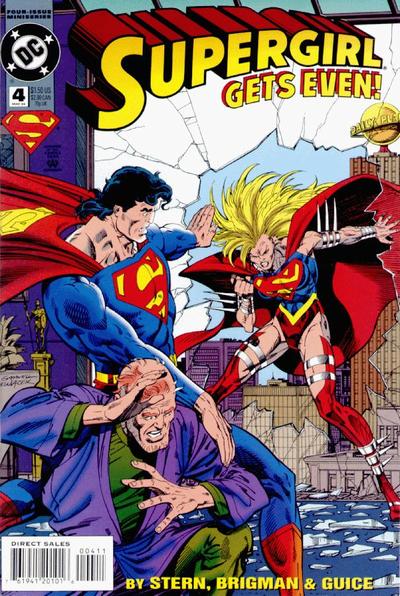 Either out of envy for Superman's super mullet or sympathy for Lex Luthor's hair fleeing from his gnarly scalp like rats deserting a sinking ship, Supergirl has accompanied her heavy metal album cover costume with a set of thrasher hair right out of a "White Snake" video. Maybe she's hoping it will prove so distracting that no one will notice how her outfit is.

Get ready to have your hopes dashed on that score, my friend!

I cannot imagine how applying gigantic metal spikes to your upper arms could help you in a fight, even if you weren't super strong or invulnerable. Assuming you can keep your cape from hanging up on them (or flat out getting cut to shreds), what kind of bizarre WWF hold do you have to get someone in for those things to even come into play, much less be effective?

Although, maybe that's why her hair is so ragged. Maybe she's flying around at super speeds, long blonde tresses wafting about, when suddenly SNIKT! The blades devastate that do like a "Slap Chop" gone rogue.

Setting that aside, just look at the aesthetics of this costume, starting with the strange muscle-shirt tunic. I imagine her flying in front of the criminal du jour, pronouncing "Check it out! I got two tickets to the gun show!" Then grunting as she flexes over and over.

What really throws me, though, aside from the bizarre haircut and useless metal spikes are the boots. If your footwear is so badly designed that you need two wide-ass metal bands to hold them up, then you have some bad footwear. It's a bizarre effect. She looks like some drug-addled refugee from a bad Eighties hair band, not a powerful super-heroine bent on saving the world.

Although, maybe this iteration of Supergirl had a secret identity as a hairdresser, and in fact she's in a towering rage because a) her arm blades have diced up her boots and hair and sleeves, and b) at least two crimes against coiffure are being committed in this room.

I'm sure someone will come along to tell us how this was really a master plan by DC to show how silly the excesses of the Nineties anti-hero fashion conventions were, but don't let them fool you -- this just flat-out sucks.

(Image and characters ©DC Comics. Thanks to X-Stacy for pointing this travesty out to us.)

23 Responses to In the land of bad haircuts, bad costumes are even worse