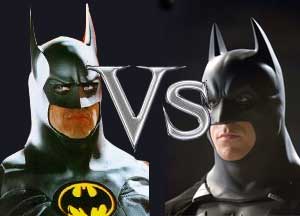 Since Batman wins every poll, I thought I would turn the tables on you and make you choose one Batman over another! Ha!

Note that for now I am leaving on the option to enter your own answers, as I'm sure there are some iconic versions I have missed. I'll close that if the answers get stupid enough, though.

And now, to the Batdebate!

So have at it, Bat-fans! Which version of Bats is "the best"?