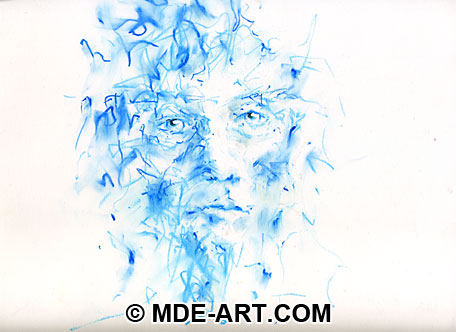 With thanks to Hammerknight for the suggestion, your Character Design Challenge this week is to create an awesome face. That's right, all entries this time around must be a portrait only of someone who looks interesting, cool, and/or awesome. When I say portrait view, I mean a close-up of the character's head, roughly from the shoulders up to just above the top of the head.

I'm particularly interested in cool-looking faces, though that's not a strict requirement. In other words, if you're doing an image of a knight, it's probably a good idea to put his or her visor in the up position, but you won't be disqualified if it's down instead.

For me, I'm going to be most impressed by faces that look distinctive, as if it could be a picture of an actual human being versus a sort of generic comic book person.

That's not to say you have to make a human face, of course. I'm sure we'll see our fair share of aliens, robots, and "other", all of which I look forward to very much as well!

In addition to the above constraints, the usual rules apply as well:

(Image from the awesome gallery of Michael E. Edens.)