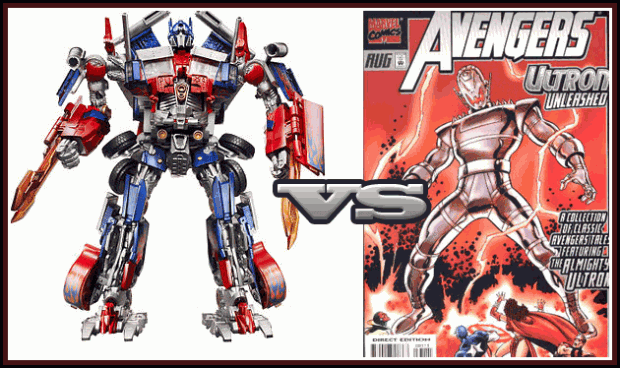 We return once again to our "Versus" series, this time pitting two of the best-known robotic leaders in comics. One is dedicated to pure evil and destruction, while the other is a noble defender of goodness. And also a truck. The question facing you today, intrepid intellectual, is:

First, let's examine Ultron. He has an adamantium shell, hypnotic powers, "a genius intellect, a capacity for creative intelligence and self-repair, superhuman cybernetic analytical capabilities, and the ability to process information and make calculations with superhuman speed and accuracy" (from the Wikipedia entry). Unfortunately, his personality is based on the brain of Henry Pym, the biggest loser in the Marvel Super Hero Pantheon. As evidence, he once created a robot bride with the brain of Mockingbird. Mockingbird! And has been defeated by the West Coast Avengers at least once. How he had the cajones to show his face at the annual Super Robot Villain convention that year, I'll never know.

On the opposite side we have Optimus Prime, the noble and powerful leader of the Autobots. In addition to his massive durability, strength, and intelligence, Optimus Prime contains within himself the Matrix artifact, which gives him the awesome acting ability of Keanu Reeves. No, wait, wrong Matrix -- which gives him the power to do whatever the writers need him to do at any particular point. Plus he has a laser gun that goes pew pew. However, his "super power" is to turn into a Mac truck. With flames pointed on the side. That's right, he's a big, smelly, gas-guzzling long-hauler who usually has a fat bald guy with back hair (hey now, that could be me I'm talking about!) sitting in his lap. Not exactly intimidating.

So who would win in a fight between these two titanic titanous titans of titanosity? Would Ultron's concussive blasts and impenetrable skin be a match for Optimus Prime's centuries of experience in warfare and alien technology? Would the universe collapse into a singularity in an all-out acting war between Keanu Reeves and Shia LaBeouf?

Only you can resolve the conundrum, my friend! So chime in and let us know who you think would win, and why!