We continue our "Versus" series of probing intellectual questions with the following: 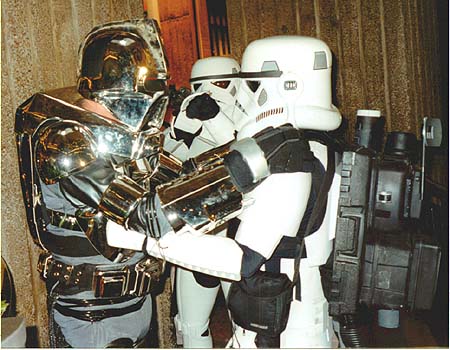 I expect this entire series of polls will form the basis of a hard-hitting PBS series any day now.

Anyway, on to our very erudite and cerebral analysis. With laser guns, PEW-PEW!

On the one hand, the Empire has Sith warriors who can read minds and throw lightning and wield light sabers (sometimes two at once!). A big chunk of the Cylons are human enough that the Force would work on them, which means they're vulnerable to Dark Side powers.

On the other hand, the Empire is made up of 99% regular ol' people, not Sith, all of whom are vulnerable to being replaced by humanoid Cylons themselves. It's hard to win a war when an unknown percentage of the people manning your guns and driving your impressive array of ships work for the other guy.

The Cylons have a record of highly successful coups, almost completely annihilating their human adversaries. The Empire, on the other hand, got its ass kicked by teddy bears and only came to power through clever voting techniques in the Senate. The Senate! So we've got a bunch of underhanded bureaucrats versus bloody-handed genocidal robot people. Yeah.

Given that, I'd probably vote for the Cylons. Plus there'd likely be a cool scene where Darth Vader discovers he's actually the Father of the Cylons, which would be awesome.

Who do you think would win, and why?