We had a ton of great entries for Character Contest 65 - Gemini, so many thanks to everyone for their awesome submissions!

As usual, I've picked out some of the ones I considered the very best, or the funniest, or that simply have some feature that I thought exceptional enough to bring to your attention.

If yours isn't listed here, that doesn't mean it wasn't good, it just means that in the opinion of one Internet blowhard (i.e. me), it wasn't quite up to the level of some of the others for one reason or another.

And now, your Finalists!

First, I feel obliged to give you Mark Shute's latest addition to the Zodiac Commandos, his "cheap GI Joe rip-off" team, the chameleon-like spy, Gemini!

Mark was also nice enough to include a shot of the whole team (thus far): 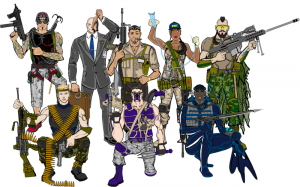 Asder gives us two blood brothers, one light and one dark, both bad-asses: 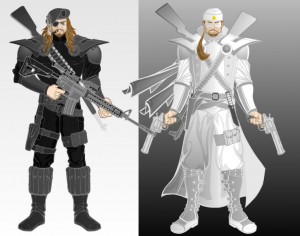 I don't know if Huginn and Muninn were actually twin ravens, but close enough. Especially the lovely treatment Atomic Punk gave them: 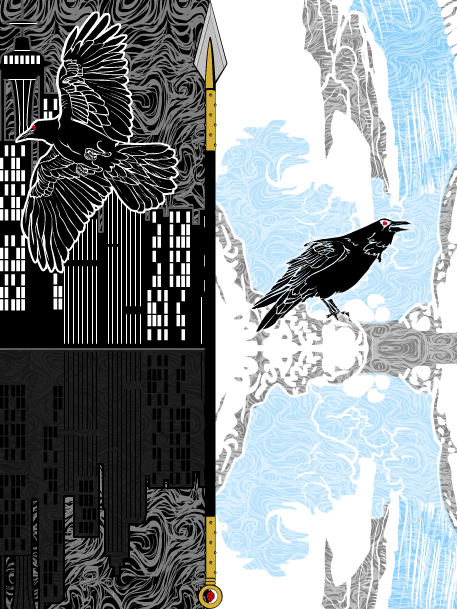 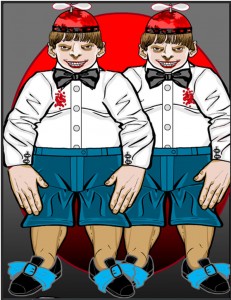 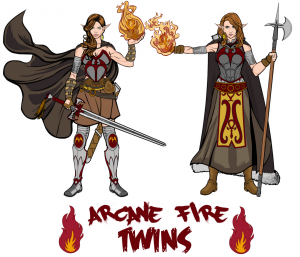 Firecracker's concept was the joining of two separate individuals into one via the creation of a cyborg, which I thought was kind of a neat take. I love the huge limbs on one side countered by the withered ones on the other. The cape works really well, too. 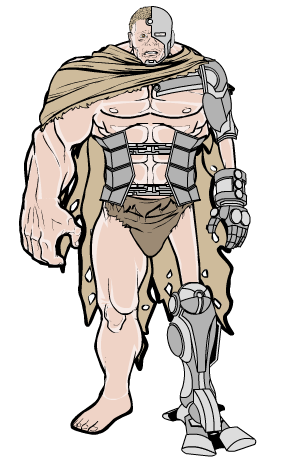 Joel's visual pun gave me a chuckle, so now I inflict it on you as well. 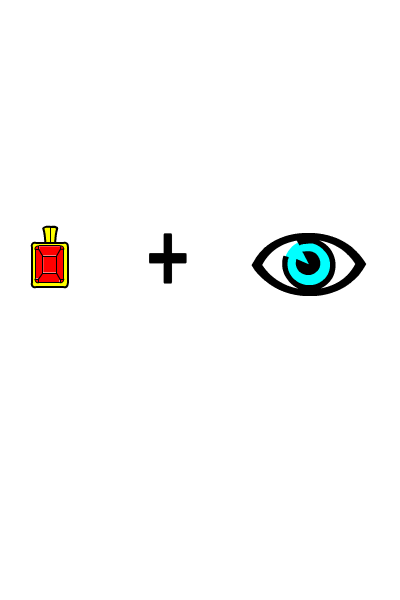 Kaldath's "Mejeer Twins" features great outfits in a fun and interesting pose, all in front of a simple but nifty background design element. 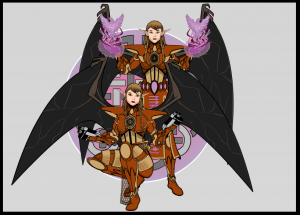 I liked Meniukas' idea of conjoined twins dancing in a carnival (or at Carnivale), particularly the nice touch of them each having their own navel tattoo. I can imagine them wanting to each have their own identity in whatever small way, and that totally fits. Nice job on the drop shadow of the, um, breast chains, too. 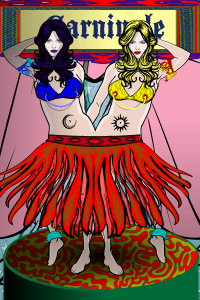 MSCat makes a triumphant return this week with his "Brains and Brawn". I would like to note for the record that a) I have a much bigger belly than this and b) I rarely wear a belt with my blue underwear, no matter how uncanny the resemblance to the guy in the green tube otherwise. 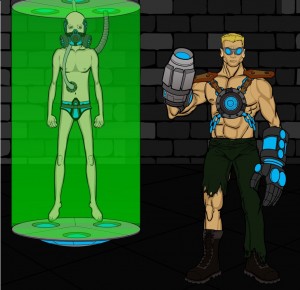 I believe newerlie is one of the first-time entrants this week, though from the look of the image you'd think he or she is a long-time veteran. I love the way the dark clouds help separate the composition, and the echoing of the purple leaves through both the figure and the fog. The two characters are similar enough to be twins, but not identical, which I think is also cool. Just an all-around excellent illustration. 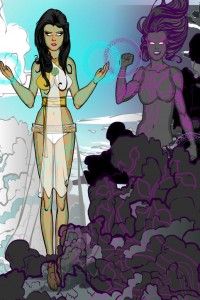 PapaKrok went with the cyborg concept as well, with what I privately think of as "Hillbilly Terminator". 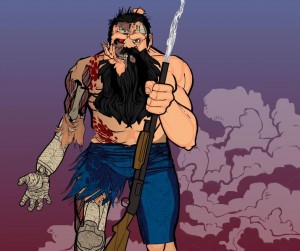 PapaKrok also put together this fantastic image of conjoined demon twins. I love, love, love this illustration. The subtle shading gradient in the background, combined with the flecked pattern and that awesome river of fire and the silhouetted insects are awesome. That allows the cooler colors of the foreground figures to pop right out of the screen. The composition is fantastic, giving the whole image drive, dynamism, action, interest, and power. Plus the characters themselves are wicked cool! 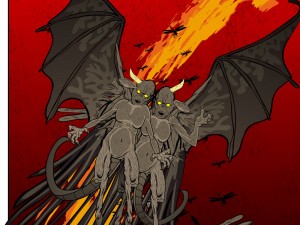 SeanDavidRoss put some of his posing research to good use in recapitulating the little spot illustration at the top of the original post. 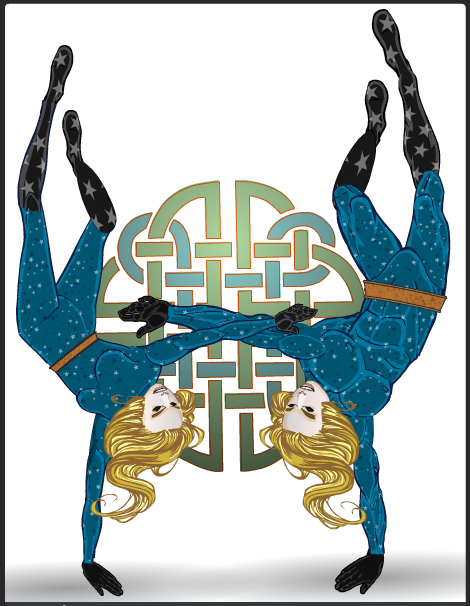 The only possible response to Tango's illustration is, "Yes." 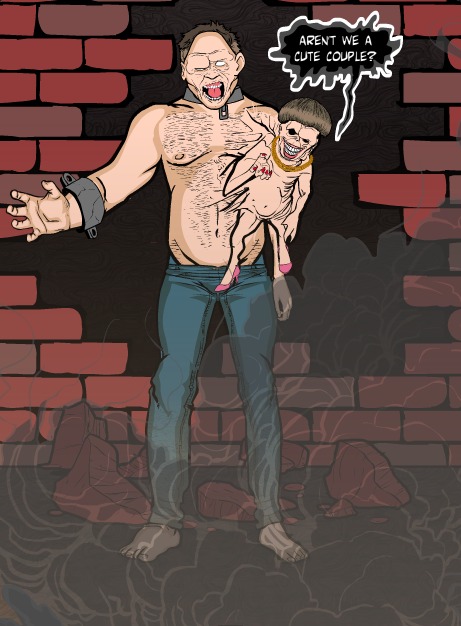 I actually loved all three of unknownblackpaper's entries this week, but I wanted to try and limit myself to just one, so I am going with "Wings". I love all the cloud effects, especially they way the smoke effect fades out over the white portions. That helps it look more like smoke and less like a pattern slapped on top of everything. The wings echo a yin-yang symbol, reinforcing the concept of opposite sides of the same coin. I like that they're male and female as well, and the subtle way the bottom wing starts out with the color of the top one, only to fade into white. 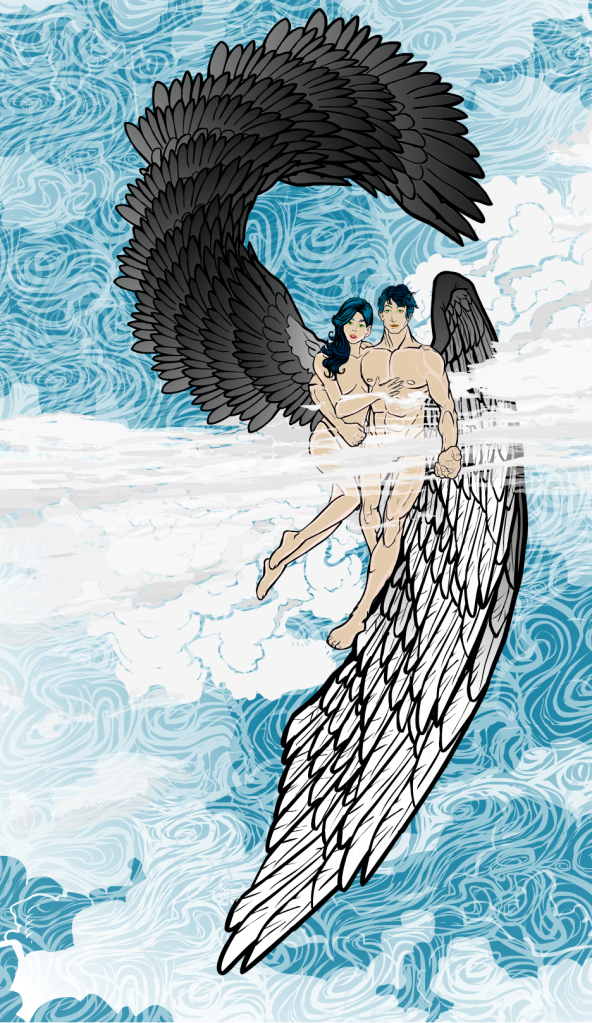 Maybe I'm influenced by having just seen "X-Men: First Class" and its groovy Sixties style vibe, but I like the whole feel of Visage's "The Gemini Twins": 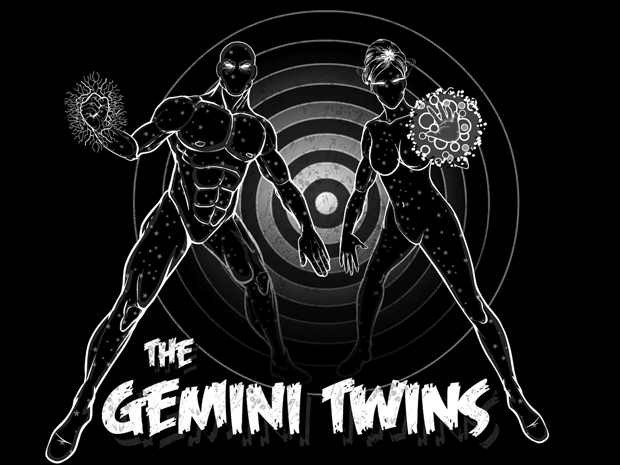 Finally, Whit put together a nifty black and white broadsheet-style promo for "The Amazing Gemini Sisters", sideshow conjoined twins. I love the tiny hats, the nifty joining of the body, and the overall feel of the piece. I do wish there was a bit more black, like maybe a negative-space spotlight on the wall behind them to help it all pop a bit more, but it's a lovely composition regardless. 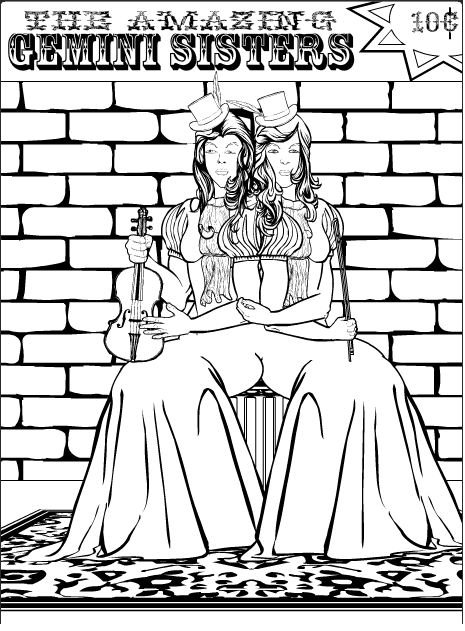 After hemming and hawing quite a while, I ended up with four that I thought were the most deserving of an overall win -- Cliff, PapaKrok's demons, newerlie, and unknownblackpaper's "Wings". I even went so far as to call Mr. Hartwell in as a Guest Supporting Advisory Judge, and between the two of us we ultimately decided that for creative composition and general wicked awesomeness, we'd have to go with ... PapaKrok!

Congratulations to PapaKrok for this, his third Character Design Contest win, to all of our Finalists, and to everyone who was willing to share their creativity by entering.

I'll be putting up a Caption Contest in a couple of hours, then another Character Design contest next Monday, so stay tuned! And be sure to congratulate PapaKrok for the win in comments.