I'm enjoying the discussion on these "Versus" polls, so this week we're going with: 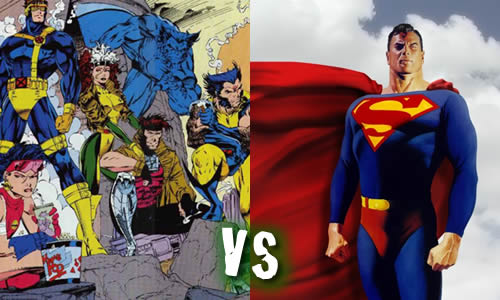 A lot of the debate, I feel sure, will center around which version of each side we're talking about. Silver Age Superman was basically God in a cape, and could do pretty much anything he wanted. Any version of the X-Men would probably get wiped out in seconds by that guy. Unless they had Magik (Illyana Rasputin) on the roster. Given Silver Age Superman's vulnerability to magic, that could be a bit more interesting. I'm not totally familiar with Magik's powers, so if you can think of a way she could level the playing field enough for her teammates to have a chance, let us know.

If we're talking post-Crisis Superman (when his power set was knocked down quite a few pegs), things get interesting. Which X-Men roster are we talking about? If we're stuck with the likes of Jubilee and Cannonball, well, that again probably won't last long. But Phoenix was a world-class power back in the day and I think could knock Supes around quite a bit. If Rogue could get close enough, that's a major game-changer right there. Plus, given their teamwork tactics, I think they'd have a real shot.

The main guy left out, of course, is Wolverine, since adamantium can't cut through Kryptonian skin, I wouldn't think.

So head to comments and make your case, folks, I look forward to the discussing and the analyzing and the frothing and the hoo-hoo and the hey-hey!

(Image via Geek Force Five, where they had a round-robin tournament a couple of years ago. They had the X-Men winning, by the way.)