The last double-digit Caption Contest was a tough one, I grant you: 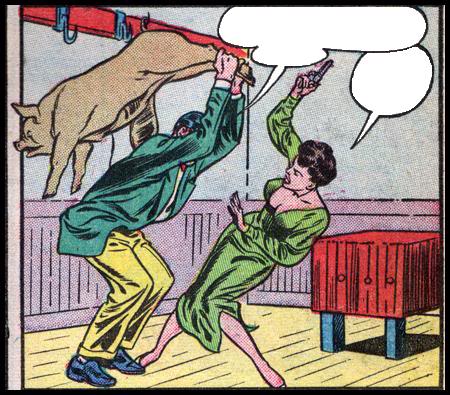 I wanted to pick entries that were funny (obviously!), but that also a) accounted for the truly bizarre elements in the panel and b) fit the dialog balloons. With those criteria in mind, I am proud to present the entries that I thought were The Best:

Man: It figures! Only I would bring a pig to a gunfight!
Woman: Ham-fisted idiot!

Man: Sweetie, I’m not one to tell you how to do your job but there might be a more efficient method of butchering.
Woman: Now who's the trained chef here? LAUNCH!

Man: You can’t spell “slaughterhouse” without “laughter”!
Woman: What does that even mean?

Man: Why, you were hiding under the pig the whole time!
Woman: It was the one place I thought you’d never look.

Man : “I thought you said you wanted me to throw around the old pigskin?”
Woman : I mean a football you idiot!”

Man: “There’s got to be a easier way to tenderize meat.”
Woman: “Just keep swinging”

I also liked abominal401's "This little piggy went SMASH!" but he didn't provide any dialog for the woman's balloon. Even an exclamation point (as suggested by another reader) would have nailed it, but alas.

Regardless, the one that I thought did the best job of captioning off this truly random panel was by ... Gargoyle323! 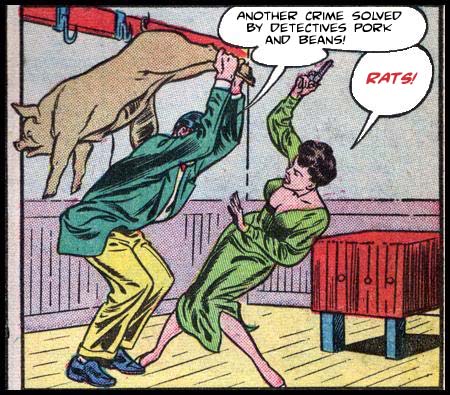 I would totally want to watch a TV series about detectives Pork & Beans. It's gotta be better than at least half of the current crop of cop shows.

Congratulations to all our Finalists and especially to Gargoyle323, who I'm happy to see back after a long illness. Let me know what you'd like as your prize!