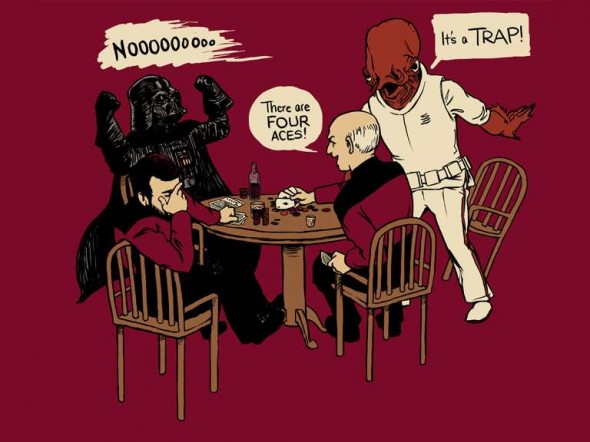 Certain fundamental disagreements on essential dogma are the hallmark of all great human endeavors. Jews and Christians disagree over the divinity of Christ, Catholics and Protestants have gone to war over the nature of Mary, IT Professionals come to blows about Macs vs. PCs, and of course many, many more.

Perhaps no other question cleaves the Geek Community like this one, however:

Further fueling the ongoing philosophical range war is the fact that both properties have manifested themselves in so many ways. Factions develop around "Voyager" and "Enterprise" or "Clone Wars" and video games like "Knights of the Old Republic". Partisans rally around polarizing figures, whether passionately positive supporters like those of the Holy Trinity (Kirk, Spock, McCoy) or equally sincere and vehement hatred like that engendered by Jar Jar Binks.

The time has come to choose sides, my friends. Like a violent Reformation or IT Department "Technology Purge", we're not here to listen to namby-pamby fence-sitting, we're at your door with torches and pitchforks and asking which side you're on, and why. So in the comments, tell us which kind of geek you are, and why you think your "Star" is the One True Nerd Way.

In return for answering the question and telling us all a little more about yourself, if you like you can ask me a question about whatever you wish and I'll do my best to answer it.