Sometimes a little self-awareness is just an excuse to deluding yourself completely in every other way: 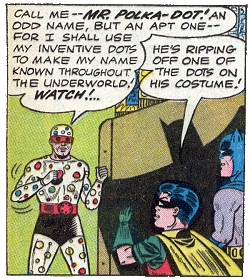 For instance, it's good that "Mr. Polka-Dot" admits his nom de guerre is odd. (Although were he even more honest, he'd probably just go ahead and call it "stupid".) But that moment of honesty probably left him blind to the fact that he was going to be wandering out in his stained PJs, flicking old grape jam splotches at Batman. I can see him now, filling out his Batman Bat-Villain Application Document, having successfully navigated the "Prefix" box ("Aha, I shall be MISTER whatever I become! It's right there on the form.") and then stumbling on the "Super Powers" list.

"Let's see, no super riddling, no super penguin powers, no hideous clown makeup, and definitely no 'Breakfast Stain Flinging' entry, oh bother! Ooo, look, 'Polka Dots', let's go with that!" Thereby proving both that Bat-Form-Writing-Machine has a sense of humor and that Mr. Polka-Dot does not. Thus, a failure of self-awareness destined to echo through the ages. With dots.

The best part about fighting this guy is watching him do a slow, unintentional strip-tease as he rips away his costume one dot at a time. At least then we won't have to look at his outfit for too long, for which we can only be thankful.

(Many thanks as well to frequent commenter Myro for bringing Mr. Polka Dot to my attention!)