I haven't picked on Rob Liefeld in a long time, but I must dive back into the pit one more time to discuss how even the simplest super hero costumes can quickly and hideously go wrong:

I don't know who this guy is, but he's apparently a commander in some sort of S.H.I.E.L.D. like paramilitary super group, and that's his costume. That's what he wakes up each morning and puts on, then leaves the house wearing. On purpose.

In his defense, maybe he's under orders and has to wear it. For instance, maybe he accidentally killed some puppies and rather than throw him in jail (wasting his super abilities) they said "Bob, you're going to have to wear this costume every day until your sentence is up." And then Bob cried, because sometimes getting a Super Atomic Scrotal Wedgie is worse than all the time in jail you can imagine.

I've said it before, but combining red and green presents a challenge for the fashion designer. Juxtaposing color opposites creates a bit of visual tension and you have to be careful to balance them out with other design elements. For instance, the Martian Manhunter pulls it off nicely: 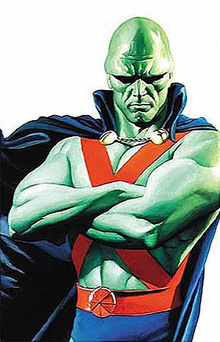 Here the red directly against his green skin creates an intense focal point and adds a lot of drama to the figure. But it works because the high-contrast red/green area is surrounded by blue, softening the impact. In the Liefeld design, no such boundary exists, and as a result you're left with nothing but clash.

I mentioned the Super Atomic Scrotal Wedgie both figures are sporting here, but I wanted to add that baggy pants with very tight metal kneepads are also a no-no. Combined with the incredibly high-waisted belt and ubiquitous thigh pouches and you've got a bona fide pants disaster here.

The boots trouble me as well. They appear to have laces cross-tied like you'd find on combat boots, but no tongue or tie to keep them all together. I realize, of course, that's actually lazy drafting rather than lazy design, but it's still irritating.

I don't get the collar device either. Is he about to take a long flight and that's his inflatable sleep pillow? Possibly, but that doesn't explain why his right pectoral is festooned with Bic pens, nor why he's got a Dustbuster on his left shoulder, nor why he's wearing his thermos on his back. Maybe the forty seven pouches adorning his festive red and green ensemble are full of crack for his pipe? Because that's the only way I see this guy living with the shame of having to wade into combat dressed that way.