These is my butt-kickin’ Spanx!

It says a lot about our culture that male super heroes like Batman and Superman can go for literally decades without changing their underpants, but female characters like Wonder Woman and Supergirl have different outfits for every possible occasion. To wit: 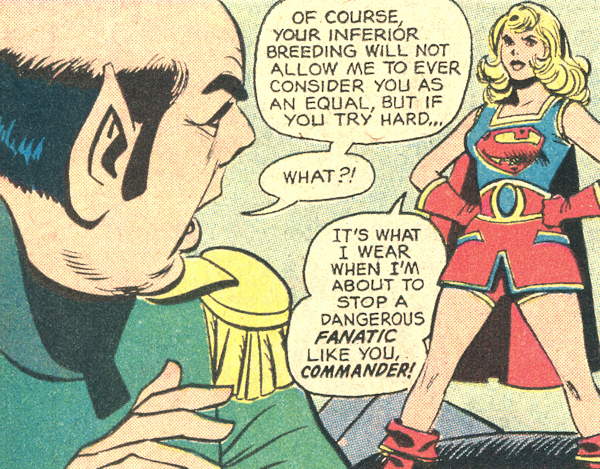 She makes you wonder if she has yet a different costume for stopping non-dangerous fanatics. On a separate note, it's sad to see how far Spock let himself go in his later years, isn't it? As Mr. Luthor can attest, balding in the Superman Universe is responsible for more evil than the next three leading causes combined.

Unlike Wonder Woman, Supergirl's "every day" costume firmly lives on the modest side of town, without showing a lot of excess cleavage or leg (though, depending on the artist, that mini-skirt can ride awfully high). This outfit, by contrast, is strangely more casual despite the martial trim and work gloves. She looks tough, don't get me wrong, especially with the wide-strapped muscle shirt.

So tough, in fact, that the high neckline makes me think she's issuing a constant challenge, saying "Don't look at my chest", which is difficult because, come on, there's a giant red and yellow "S" right there. Which is about the only way the even more gigantic eye at her navel makes sense. "Don't look at my chest, LOOK AT MY CROTCH AND IT WILL LOOK RIGHT BACK AT YOU! LOOK AT IT!!"

Anyway, I actually think this isn't a horrible outfit. Do something with those enormous Playtex oven cleaning gloves, replace the Spanx under the tunic with sensible bikini-cut spandex, lose the blue pockets, and reconfigure the belt so it doesn't look like the Eye of Sauron and I think it would be fairly decent.

Of course she'd have to put on her "What I wear to change clothes" costume to do so, but I'm sure Evil Bald Spock won't mind waiting.

6 Responses to These is my butt-kickin’ Spanx!